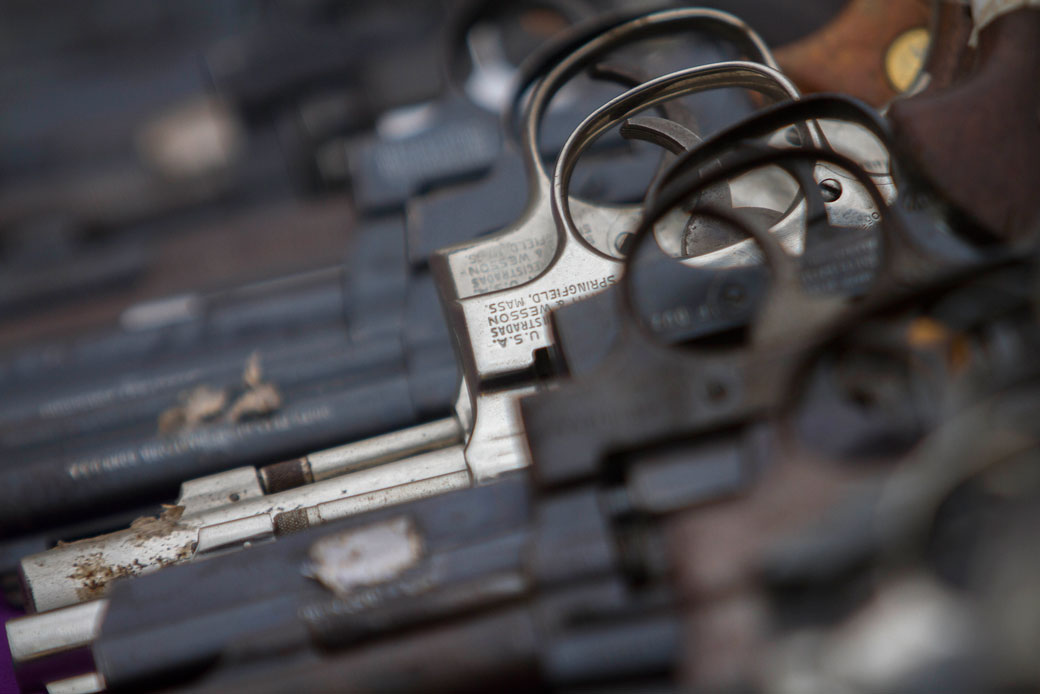 (Insightcrime.org) US President Donald Trump has proposed a new reform that would ease firearm export controls for US weapons manufacturers, which could increase the already high number of US-sourced firearms used in criminal activities in Latin America.

The proposal, published May 14, would shift authority to regulate exports of certain firearms and related products from the State Department to the Commerce Department. The move aims to streamline the approval process for arms exports so US manufacturers — suffering from decreased domestic sales in the Trump era — can sell more guns, ammunition and accessories abroad.

“There will be more leeway to do arms sales,” a senior administration official told Reuters last year when the plan was first floated unofficially. “You could really turn the spigot on if you do it the right way.”

The rule would apply to “commercial items widely available in [US] retail outlets and less sensitive military items,” the proposal states. That definition would cover products like assault-type rifles, military-grade sniper scopes, armor-piercing ammunition and most handguns.

While many in Congress support the move, several powerful Senators have vowed to fight it.

In a joint press release, the human rights organization Global Exchange and the Violence Policy Center, a pro-gun control group, slammed the proposal, saying it “will likely lead to more US guns getting into the hands of criminal organizations, human rights abusers, terrorist groups, and others who wreak harm.”

Indeed, US-sourced guns play a major role in fueling criminal violence in Latin America and the Caribbean. Data from the Bureau of Alcohol, Tobacco, Firearms and Explosives (ATF) consistently shows that a large percentage of firearms seized in Central America and the Caribbean can be traced back to the United States. And a majority of murders in the world’s most homicidal region involve the use of a gun.

The new export rules are likely to affect many countries throughout Latin America and the Caribbean. But due to its proximity to the United States and other factors, Mexico is likely to see a significant impact.

InSight Crime spoke with researcher and activist John Lindsay-Poland of Global Exchange about the flow of US firearms to Mexico, the role these firearms play in rising levels of violence and the potential effects that the proposed reform might have on these dynamics.*

InSight Crime (IC): American guns have for years been flowing into Mexico and elsewhere in Latin America. Can you give us some background on this and some context for the recent focus on this dynamic as of late?

John Lindsay-Poland (JLP): It’s true, US weapons have been flowing into Mexico and other countries both legally and illegally for many years. The end of the assault weapons ban in 2004 created even greater conditions to obtain firearms that are of a special interest to organized criminal groups in Mexico, Central America and the Caribbean. The structure of the US-Mexico border is such that most controls are on the south-to-north trafficking route, under the idea, in the United States, that the threat is in Mexico. I think that corresponds to an American exceptionalism idea that [the United States] cannot pose a threat. The infrastructure does not control very well for weapons that are going north to south.

When the drug war in Mexico heated up, the market conditions were great both on the supply and demand side for an increased flow of military-grade weaponry. The drug war becomes helpful to the gun industry because the premise of the drug war is that the United States and its allies are going to fight drug trafficking through military and policing means, so therefore they’re going to be armed. The collusion of these forces with organized crime is overlooked in the interest of that market.

IC: Two of the US agencies primarily responsible for combating cross-border arms trafficking are the ATF and the Department of Homeland Security’s Immigration and Customs Enforcement (ICE). Have these agencies collaborated effectively or been given the proper resources to stem the flow of US firearms to Mexico?

JLP: There’s a US Government Accountability Office (GAO) report that says they were not collaborating effectively. I don’t know this from my own fieldwork, but I would take the GAO’s word for it.

The ATF has been hobbled by congressional restrictions as a result of the gun industry’s lobbying that has prevented it from having a permanent director for years, the resources and the legislation. The fact that international gun trafficking has not been a federal crime in itself is also an indicator of the lack of resources that the agency has.

Because the US prioritizes commerce, the effort to try to stop physical things from going over the border is never going to be successful. There will be people who are caught and weapons that are seized, and that’s a good thing, but any successful effort has to go further upstream to the production and marketing of weapons, as well as the policies and laws related to that, in order to stop the flow.

IC: How effective have Mexican authorities been in stemming the flow of US weapons south to Mexico?

JLP: Not effective. A 2013 study from the University of San Diego estimated that 250,000 firearms purchased in the United States are trafficked into Mexico each year. The number of firearms recovered at crime scenes has gone down in recent years. It’s unclear exactly why, but the incentives within the Mexican police and armed forces are not strong enough to go after weapons. There are incentives to go after drugs, but there’s also of course extensive collusion between police and military forces and organized crime, so that I think is also undermining efforts to recover weapons.

IC: Do you think the flow of US firearms to Mexico is used to explain the high levels of violence we’re seeing in Mexico as opposed to flawed security strategies or more structural issues?

IC: With growing support for stricter gun control in the United States, is there any chance we’ll see a decrease in the number of US guns in route to Mexico?

JLP: I think there is an opening now. The gun violence prevention movement in the United States has been very focused on crimes committed with guns in the United States, and generally has not been aware of how US-sourced guns are being used outside our borders. So that is an important piece of trying to have an impact in Mexico or in other countries.

“The approach to security and to drug trafficking in Mexico is supported by the United States, which is reinforcing a kind of arms race between criminal groups and the state.”

There is interest now in Mexico in increased work around guns both within the country and bilaterally. I think there is increased interest in how to create more awareness that could lead to policy changes that would have an impact on the guns coming into Mexico. But there’s a long way to go.

IC: In a recent article you wrote for Al Jazeera, you argued that the United States should “suspend gun export licenses to Mexico and reorient its security policy there.” Can you explain your reasoning?

JLP: We call for a suspension of firearms licenses to Mexico because under the current system, there is no adequate end-use control mechanism for legally exported weapons to Mexico from the United States. When a gun producer goes to the US State Department to seek an export license, it has to name the end users.

Now in Mexico, only the Mexican military is legally permitted to import firearms. And they’re also the only legal distributor within Mexico, including to the police. All police weapons in Mexico come through the Mexican military, which produces them themselves, although this is a very small portion, or they import them. About two-thirds of the weapons that they have imported have gone outside Mexico City. However, when the license comes before the State Department, 80 percent of those applications, according to a State Department source who I spoke with, said that they name the end users as within Mexico City, the military or police within Mexico City, when we know that most are being distributed outside the capital to police forces around the country.

The US State Department is not getting sufficient information about who the end users really are, which means that they cannot under the current system exclude police forces that have committed severe human rights abuses or colluded with organized crime from getting US-sourced firearms. It’s important that the State Department suspends those licenses and creates a system with end-use controls that allows them to know where the end users are and who they are.

IC: How will the Trump administration’s proposal affect levels of violence in Mexico?

JLP: We can expect even less oversight on end users of US guns, so more weapons going to police and military units that Washington knows are colluding with organized crime, have “lost” weapons, or have committed serious human rights abuses. That further erodes the rule of law and makes conflicts over territory and business even more violent.

* This transcript was edited for clarity and length.