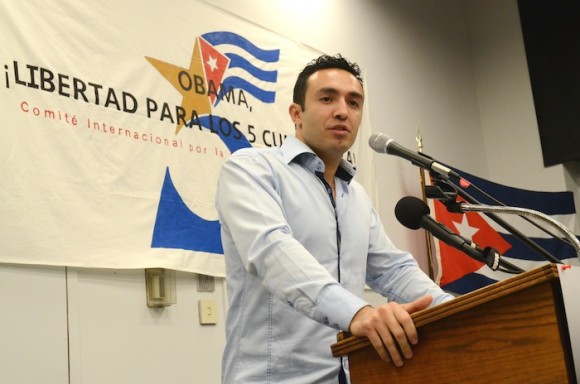 Q24N (Prensa Latina) The French academic Salim Lamrani noted “the historic will of the United States to use the migration issue to undermine the Cuban Revolution”.

The Cubans who arrive illegally in the United States are welcomed with open arms, while the clandestine immigrants from other nations are arrested immediately and expelled to their counties of origin, said Lamrani in an article published on the website Global Research.

Lamrani pointed out that in its war against Cuba, the United States decided to use the migration issue to destabilize the country.

In 1966, he stated, the US Congress passed the Cuban Adjustment Act, the only one in the world, which establishes that all Cubans who emigrate legally or illegally, peacefully or violently, on January 1, 1959 or later, will automatically be granted the statute of permanence residents after one year and one day.

They will also receive social assistance (housing, work, medical care, etc.), as well as the possibility to become a US citizen after five years. It is a formidable tool to encourage illegal emigration, the expert added.

Therefore, for more than 50 years, the world’s richest country has opened its doors to the people from a small Third World country, with limited resources and a victim of extremely severe economic sanctions, said Lamrani.

For nearly ten years, he pointed out, Washington has also implemented a policy aimed at looting Cuba, a well-known country worldwide for its excellent healthcare system, of its physicians.

In 2006, the Bush administration approved the Cuban Medical Professional Parole Program (CMPP), aimed at favoring the emigration of Cuban medical professionals to the United States by offering them the possibility to work there, he noted.

This program, he stated, is particularly aimed at all 50,000 Cuban doctors and medical personnel who are working in rural regions in 60 Third World countries, where they are assisting the underprivileged.

Lamrani, who is a doctor in Iberian Studies from the University of Paris Sorbonne-Paris IV, noted that US President Barrack Obama, in office since 2009, has not eliminated that legal instrument despite his statements in favor of normalizing relations with Cuba.

The abrogation of the Cuban Adjustment Act and the Cuban Medical Professional Parole Program is indispensable to achieve peaceful relations between the two countries. Washington cannot expect cordial understanding with Havana while implementing hostile legislations that endanger the lives of Cuban citizens, Lamrani stressed.

Speaking in Miami on April 17, the anniversary of the United...
Read more