Used Car Imports Down 40% This Year 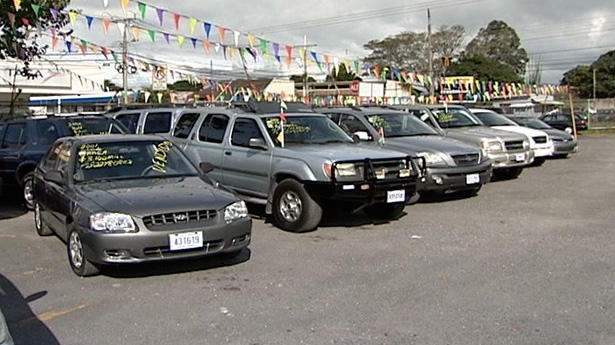 A cause and effect of the decrease of used car imports in Costa Rica, threatens businesses and will probably hike used car prices.  Costa Rica is one of the few countries were used cars appreciate in value.

According to the Cámara Costarricense Automotriz (Automobile Association of importers and exporters), used car imports fell 40% this year, threatening some 2.000 local importers having to close down their business, resulting in the loss of some 50.000 jobs.

The decrease is measured against imports for the same five month period in 2012.

The reduction in imports also affects the government coffers, as the Ministerio de Hacienda (Finance Ministry) stands to lose some ¢48 billion colones (US$96 million dollars) in tax revenue.

Businesses say the decrease in imports is directly a result of a recent government policies that include an increase in the taxable value of vehicles , approved at the end of last year. Owners of new cars currently pay a 53% tax, while owners of used cars pay a 79% tax.

Another measure affecting used car imports are changes to the Traffic Law that went into effect last October. The new traffic law prohibits the import of vehicles totalled in accidents. In the past, importers would visit car auctions in Florida, for example, buy clunkers, damaged cars and cars written off by insurance companies in the United States, import them into Costa Rica and fix them and resell them or used for spare parts.

The cost of labour to repair a vehicle is much lower in Costa Rica and since car prices are high, the business of importing wrecks was a viable one.

It is expected that representatives of the Association and Hacienda will meet later this month to evaluate possible solutions.

(QCOSTARICA) As of this Monday, September 14, the United States Government (USG) stopped monitoring the temperature of international travelers, reported the Center for Disease...
Read more
HQ

(QCOSTARICA) The Criminal Court of San Carlos issued, early this Sunday, six months of preventive detention for the police chief of the canton of...
HQ

(QCOSTARICA) He had been dead for days, possibly since Friday. But it wasn't until Sunday night when family members called the COVID line, 1322,...
Front Page

(QCOSTARICA) President Carlos Alvarado called on Tuesday, September 15, during the celebration of Independence, to protect democratic institutions. "We do not want to have the...
Health

Father of Minister of Health Dies

(QCOSTARICA) The father of the Minister of Health, Daniel Salas, died this Wednesday and confirmed to the press 7:55 am. “We confirm the unfortunate death...
Trends

Costa Ricans take a lot of pride in sports and games. They are always ready to cheer on their national teams, especially when it...