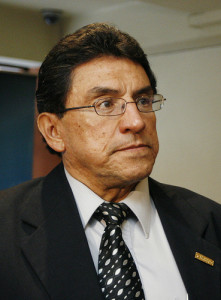 Vargas was arrested in January, 2011, and was found guilty this year in the same court, of seven counts of fraud and three of money laundering to hide proceeds from the venture.

The Costa Rican had maintained his innocence up until Tuesday’s sentencing hearing, when he at last admitted he had committed “an error” but still denied intent to defraud.

Since Vargas is 61 years old, the punishment can amount to a life sentence if he is not released from prison before his sentence is complete or if his appeals are denied. (See previous articles.)

“I’ve learned my lesson,” he told the court, “I should not have attempted to rescue the company in that way but I don’t think I should have to pass the rest of my life in prison.”

“I’m a rehabilitated person,” Vargas told the judge, “a good person, a good citizen.” He said he did not merit the severe sentence he received. But it could have been worse, in a manner of speaking. If Vargas had received the maximum for each count, the sentence would have been almost 200 years in jail.

Judge Gibney, however, did not agree that Vargas was a “good person.” Gibney said Vargas should serve as an example for those who would follow a fraudulent path.

‘Perhaps some may not learn from your example,” said Gibney sternly, “but others will. I’m convinced you have no respect for the victims nor are conscious of your crime.”

Provident Capital represented itself as a “reinsurance” investment opportunity for investors in a stagnant economy and a hedge for insurance companies to protect their policies. But it was not either and lost investors millions of dollars.

Gibney said during the hearing that he had contemplated a lesser sentence but decided against it. “Vargas committed a grotesque crime against innocent people,” Gibney said, “If I had freed him, nobody could be sure he would not turn around to do it again.”

Of the estimated 3,500 victims of the PCI scam, 22 showed up to see Vargas sentenced Tuesday. Of these, seven gave statements before the court, three of them tearfully.

Among them was Therese Giger, a Chicago woman who lost half a million dollars in the PCI scam, as well as her husband to cancer, which she claimed was spurred on by his depression after learning of the disappearance of their savings.

“My husband passed his final days blaming himself for having lost our life savings when it is Mr. Vargas who should feel guilty,” she said.

Paula Whitacker of Houston, Texas, lost a million dollars and her only son. She said she had hoped to fund a clinic in his honor after he died but the PCI scam swallowed the legacy.

A Virginia woman, Kimberly Holland, lost her father to cancer while he lamented having lost $600,000 to PCI. “He died without an honorable funeral, not even flowers, because he felt so guilty at my spending money on him. This is something I can never forgive Vargas for,” she said.

She now is caring for her mother who suffers from Alzheimers.

But Vargas was not always a hated name. At one time, he was a big name in local sports, owning 10 pro soccer teams (and their stadiums) in the first and second divisions over the years.

As head of the ultra-successful Saprissa club, he paid himself $5,000 salary in 2001, the first Costa Rican club chief to receive a salary. He explained that he was doing the job full time and had no other income.

But Vargas is not the only national soccer figure to run afoul of the law. On Aug. 30, Carlos Pascall, president of the Limon club, was sentenced to 12 years in prison by a San Jose court for money laundering.

The First Division soccer organization, UNAFUT, has vowed to work with the court investigative division, OIJ) and with Interpol to protect investment in Costa Rican clubs. The organization has suffered sharp setbacks financially in the Pascall and Vargas cases.

Vargas says he invested $20 million in local soccer teams. Today, he has no financial interest in any Costa Rican club. Vargas admitted that the money came from the $43 million he cost investors in PCI but represented it as an attempt to help local youth and the sport.

Although defense attorney for Vargas, Jeffrey Everhart said an appeal was possible, it would little benefit the Tico. He despaired of winning an appeal. The national newspaper La Nacion reported that Everhart all but begged the court for clemency.

Update: Under the Strasburg Convention, Vargas has the possibility of serving his sentence in the country of his origin—in other words, a white-collar crime section of a local prison, most probably La Reforma.

But a high official of the Justice Ministry here, Reynaldo Villalobos, said that, knowing the U.S. justice system, that country will be in no hurry to make a transfer. Perhaps if legal counsel for Vargas files a petition later, it may be granted. It would allow his family to visit him more often.

Meanwhile a former auditor for the company, also a Costa Rican, is still awaiting his sentence. a

QCOSTARICA - Changes in consumption habits in terms of times, types of preparation and specialties challenge the coffee sector. Most of the consumers in Costa...
Cine (Movies)