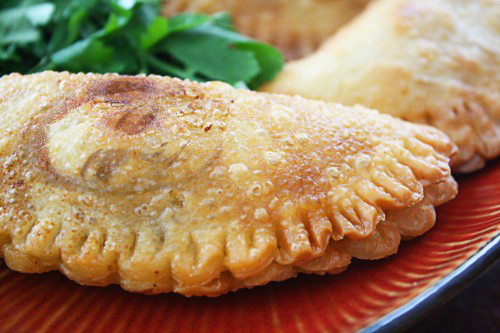 From the VATICAN ENQUIRER – Alajueal, Costa Rica – Carmen de los Ángeles Castillo Fuentes, 73, has been making empanadas for over five decades, but she’s never made one like this.

Yesterday afternoon, as Castillo was placing her freshly baked treats on the counter to cool, something on one of the empanadas caught her eye. On the outer crust of the greasy baked good was a faint marking that resembled the profile of a woman. Doña Carmen and her closest amigos believe the image to be the Virgen María (Virgin Mary).

This story is a parody, satire – all made up. NOT TRUE. It’s publication whose sole purpose is entertainment.

Rigoberto, Doña Carmen’s grandson, came home sometime after 3p.m. to find his tita with fingers knotted in prayer, knelt on the kitchen floor, apparently whispering quietly to a tray of cooling empanadas, he said.

“Honestly, I didn’t really think much of the scene,” said Rigoberto. “Abuela’s a bit chiflada (nuts) at the best of times. But when I said ‘que rico’ and tried to touch her empanada she jabbed me in the sternum with her rolling pin and started screaming. That’s when I knew something was going on.”

Word of Doña Carmen’s empanada spread and the Castillo kitchen has quickly become a gathering place of the faithful. People from all over the country are visiting the shrine to pay reverence to the empanada, and Doña Carmen says they are all welcome.

“Everyone deserves a chance to see, smell and feel the empanada of the Virgin,” she said, adding that this sacred Virgin empanada is not for tasting.

The family has since contacted the Catholic Church and, although Vatican officials insist that an investigation is pending, the Archbishop of Costa Rica, Monseñor José Rafael Quirós Quirós, has already declared Doña Carmen’s empanada a miracle.

“Clearly the lord is sending us a message,” said Quirós to the crowd gathered in front of the Castillo home. “Jesus didn’t have the luxuries we have today. His mother wasn’t able to feed him her empanada as he was dying for our sins. During this most holy of weeks, we shouldn’t be gorging, we should be fasting and spending more time contemplating the sacrifice of our Lord. In other words, echar your harina at church, mae.”

At present, the empanada de chiverre de Carmen de los Ángeles is on display at the Castillo home in Alajuela. The family invites all to come and behold its sticky glory. Viewings are from 10a.m. to 4p.m. throughout Holy Week.