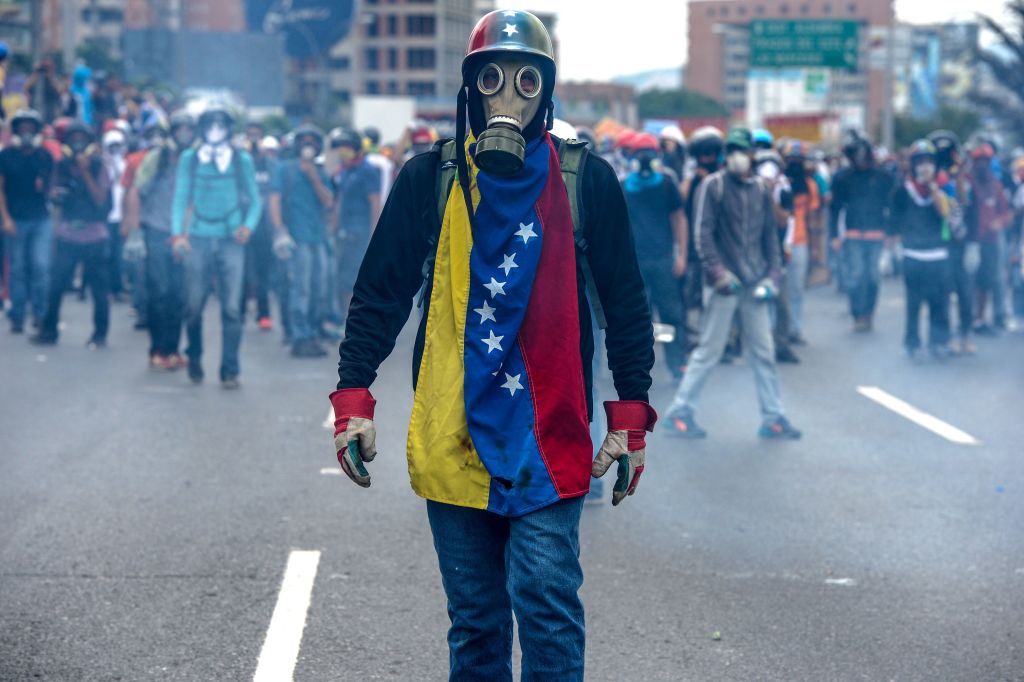 Venezuela, the country that was famous for its prosperity and oil production, is today, the country that represents the greatest threat to Latin America and the world. The massive migratory wave, links with drug trafficking and terrorism, and the alliances with totalitarian, socialist, and dictatorial governments represent a ticking time bomb.

The American Conservative published an article titled ‘Why the United States should not be so concerned about Venezuela.’ In the article, Mark Falcoff points out that Venezuelans got themselves into socialism and “there are no good reasons for Washington to intervene.”

The misplaced article not only completely blurs the reality of what the South American country represents geopolitically, but also ignores how the left in Latin America pushed Hugo Chavez’s victory and has for decades supported the violation of human rights, private property, and free markets. The left in the region financially supported socialism in Venezuela, allowing that nation to become a refuge for terrorists and drug traffickers.

The United States is not the only country that should be worried about Venezuela; the rest of the nations of the region must act in the face of the imminent threat posed by the dictatorship of Nicolas Maduro.

Chavez and Maduro’s socialism closed down more than 10,200 companies in Venezuela, reduced oil production to historic lows, undertook a mining operation that has caused an ecological genocide and created a humanitarian crisis leading to the largest mass migration in the history of the region.

Security specialist Joseph M. Humire told PanAm Post that the most significant reason the country is a ticking time bomb is because of the mass migration of Venezuelans:

Drug trafficking and terrorism have always existed under the regime of Maduro and Chavez, but immigration is unsustainable. I don’t think the governments of Latin America can stand it that long. I believe that with time, they will begin to take more controls and measures to restrict the flow, and the country will be in conflict; it will be a destabilizing factor.

In the United States, the convergence doctrine is at play, which means that in Venezuela, international organized crime groups are active, and they unite with terrorist groups.

“Venezuela is the largest and most important convergence point in the region where these groups have a level of protection from states that gives them support and increases their capacity,” Humire explained.

“That country is a territory of logistics and services for terrorist and drug trafficking groups; they share lawyers, accountants, transporters, technicians, etc.,” he said. “Venezuela is the territory of convergence, the logistical point for criminal groups,” he added.

The dangerous friends of Maduro

The threat posed by the dictatorship in Venezuela goes beyond that. Its international political alliances have resulted in the presence of Russia, China, Cuba, Iran, and even North Korea’s influence on Latin American soil.

Analysts believe that Russians are looking to impact the countries in the region they consider to be the “backyard of the United States,” and for that Venezuela became their best ally.

Russia maintains a military presence in Venezuela, commercial agreements with the country’s refineries, and the county also needs to collect a debt that would exceed 20 billion USD in loans and credit to Caracas. Furthermore, Vladimir Putin’s government has become the largest supplier of arms and military vehicles to the Maduro dictatorship.

China’s presence in Venezuela has also become a threat to the United States and countries in the region. The Asian nation is trying to take control of Venezuela’s primary industrial and economic sectors through massive investments and loans in exchange for assets in Venezuelan gas and oil companies.

“China is trying to impose its economic control on Venezuela by investing in infrastructure and providing large loans that Caracas would have difficulty repaying,” said Craig Faller, head of the U.S. Southern Command.

The U.S. military high command described China as the direst threat to democracy in the world and asserted that the United States would confront the increasing Chinese influence worldwide.

Apart from the danger presented by China and Russia, the Israeli human rights organization, Simon Wiesenthal wrote a letter to the Secretary-General of the Organization of American States, Luis Almagro, urging him to work to prevent the “transplant from the Middle East to the Americas.

The organization talks about the Islamic Republic of Iran’s offer to send members of its Islamic Revolutionary Guard (IRGC), recently designated as a terrorist organization by the United States, to Venezuela, according to Infobae.

Although no source from either the Iranian or Venezuelan regime has officially and publicly confirmed this offer, the proposal coincides with the inauguration on April 8 of a direct flight between Tehran and Caracas through the Iranian airline, Mahan Air, as part of the bilateral agreements between Iran and Venezuela.

According to investigations, IRGC controls Mahan Air, and the airline is also known as a means of transporting weapons. In fact, countries such as Germany and France banned their flights, while the United States sanctioned it in 2011.

Venezuela: The House of Terrorism and Drug Trafficking

Colombian army intelligence reports revealed that Seuxis Paucias Hernandez, alias Jesus Santrich, a FARC guerrilla leader, fled to Venezuela and is now protected by the National Liberation Army (ELN), the same terrorist group that has said it is willing to protect Maduro from an eventual military coalition against the dictatorship.

Maduro seeks to shield the Chavista revolution with the protection of Colombian terrorist groups that today operate in Venezuela and continue their criminal work. These, in turn, have committed themselves to protect the regime and provide it with economic benefits and advice on criminal logistics.

The dictatorship has made Venezuela fertile ground for criminality. The world is investigating the South American country for allowing the development of terrorist activities, drug trafficking, international money laundering, and corruption.

Further, there are Venezuelan officials who are now fugitives from international justice, such as Tareck El Aissami, vice-president of Venezuela’s economic area, who is on the list of the ten most wanted fugitives, after the U.S. Immigration and Customs Enforcement (ICE) published his name accusing him of “international drug trafficking.”

While Maduro’s regime has become a refuge for criminals, it has also generated an unprecedented humanitarian crisis, where thousands of Venezuelans have died due to shortages of food and medicine. At the same time, the population has the lowest minimum wage in the region, not exceeding three USD per month.

There are already more than five million migrants outside Venezuela, and countries no longer have the capacity to receive more migrants. Host countries are running out of money and have not received the international assistance needed to deal with the migration crisis.

In Colombia alone, the cost of caring for migrants is estimated at 0.3 % of gross domestic product (GDP), putting pressure on the infrastructure of public services, health systems, and education.

The Venezuelan migratory crisis has not stopped, and as the crisis in the country worsens, so does the number of Venezuelans fleeing the dictatorship. If the situation does not change, there will be an unimaginable migratory stampede that will principally harm the countries of the region.

These are just a few of the hundreds of factors that merit the attention of countries like the United States because there is a reason to worry and get involved in the events of the South American country. Additionally, all the concerns presented here are established in the principle of Responsibility to Protect, which obliges the countries of the world to act to restore democracy and institutions in Venezuela.