In February, Maria Faria, the ambassador designated by the leader of the opposition and self-proclaimed interim president of Venezuela, Juan Guaido, Maria Faria, took control of the Venezuelan embassy in Costa Rica.

The take over was premature as Costa Rican authorities had given the representatives of the government of Nicolas Maduro a diplomatic until April 15 to leave the country and forced Guaido’s representatives to hand over the keys to the embassy and wait out the process.

“The government of Venezuela decided to revoke the diplomatic accreditation of Danilo Gonzalez Ramirez, who served as the charge d’affaires of the Republic of Costa Rica in Venezuela,” the statement read.

It said the government of Costa Rica had violated the articles of the Vienna Convention on Diplomatic Relations “by allowing the forcible seizure of our embassy in San Jose to take place.” 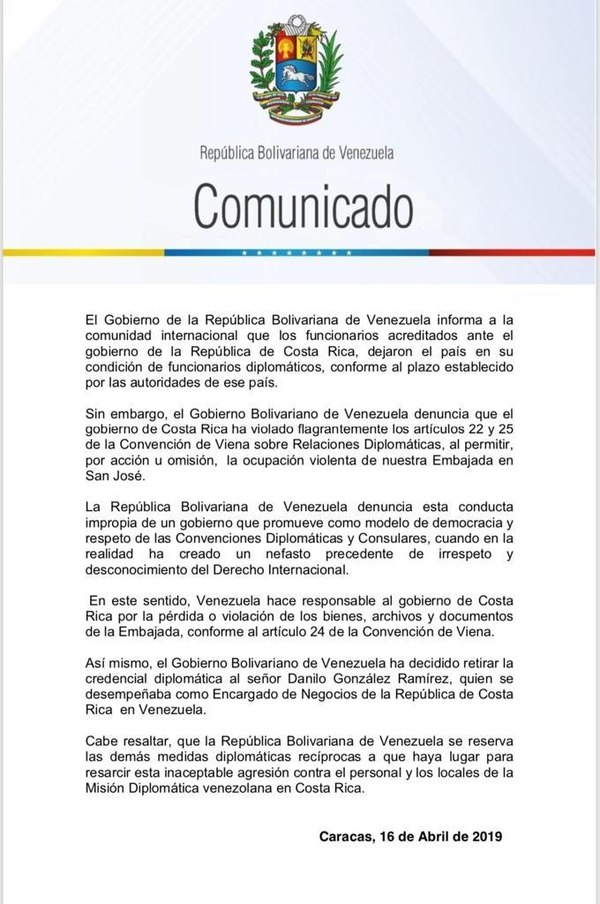 For its part the government Carlos Alvarado warned Maduro’s regime in Venezuela that it is responsible for the safety and integrity of the Costa Rican charge of business in that country.

“The Government of Costa Rica deplores the media announcement of the Nicolás Maduro regime to withdraw the credentials of diplomat Danilo González, as Costa Rica’s business manager in Venezuela.

“In this sense, the regime is held responsible for the personal security and integrity of the representative of the State of Costa Rica in that country,” the Foreign Ministry reported in a press release.

Since January 10, the government of Costa Rica ignored Nicolás Maduro as president of that country, to later join more the now more than 50 countries, including the United States, to recognize Juan Guaidó as president in charge of Venezuela.

For this decision, the Foreign Ministry asked the three diplomats of Maduro who were appointed in Costa Rica to leave the country no later than April 16. Only Nabil Mora, the Minister-Counselor, withdrew, and two more diplomats, Nelly Gliset de la Mata and Angélica Ramírez re-entered with their ordinary passport.

Maduro has accused the United States of trying to orchestrate a coup against him.

Russia, China, Cuba, Bolivia, Turkey and a number of other countries have voiced their support for Maduro as the only legitimate president of Venezuela.

- Advertisement -
Paying the bills
Previous articleOne year after Nicaraguan uprising, Ortega is back in control
Next articleCosta Rica has the fourth most expensive city in Latin America

QCOSTARICA - The Government of Rodrigo Chaves has already...
Trends