Venezuela: What You Need to Know About Elections for the Constituent Assembly 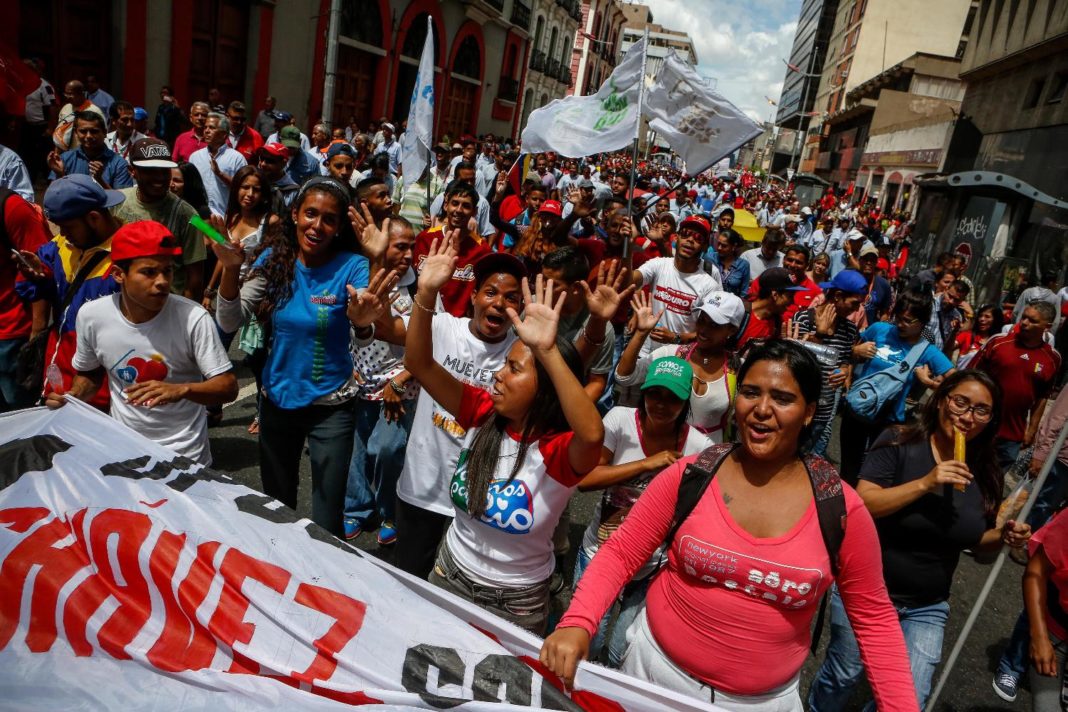 Venezuelans will head to the polls on Sunday, July 30, to elect representatives for the National Constituent Assembly, an initiative from President Nicolas Maduro to further develop the country’s democracy and to help ease tensions with the opposition.

In the lead-up to the election, teleSUR takes a closer look at the voting process, how representatives will be chosen and what the new constituent assembly will mean for the future of Venezuela.

Venezuelan President Nicolas Maduro presented the National Electoral Council, CNE, with his proposal for structuring the electoral bases through which constituent representatives will be elected.

Venezuela obviously doesn’t need a new constitution, but a new goverment with decency and with respect for human rights, for fundamental democratic principles and institutions, and for the rule of law.

This will open the way for 540 constituent parliamentarians to be elected by the Venezuelan people in a manner that is “direct, secret, universal, territorial and sectoral.”

In a document, signed before the CNE, President Maduro stated that this call for the Constituent Assembly was made “in the context of the current social, political and economic circumstances in which there are severe internal and external threats against democracy and patrimony against the constitutional order.” 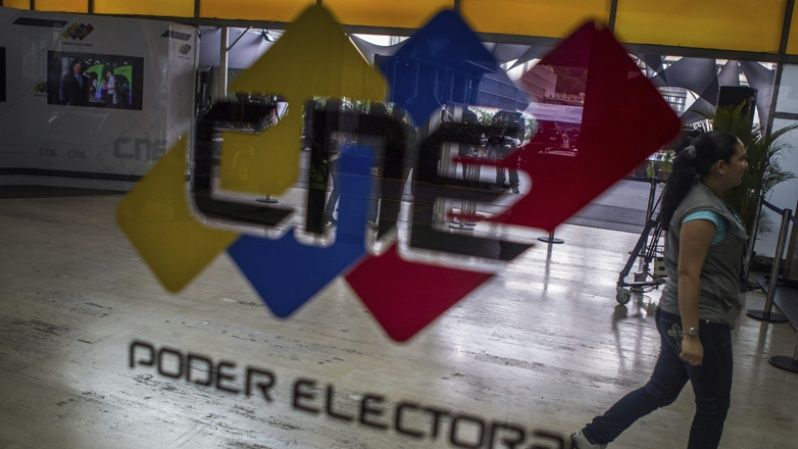 Put another way: Chavistas are placing their commitment in a legal electoral process, outlined by the current Constitution, to form a plenipotentiary Constituent Assembly. This is the only instance in which popular election can overcome (as stated in Article 349 of the Constitution) any popularly elected power.

The constituent is in violation of the democratic constitution of Venezuela, and it’s obvious for everone that the constituent has one single purpose; to avvoid general elections.

This same method will be used to elect seven constituents in the municipality Libertador de Caracas, the capital of the Bolivarian Republic of Venezuela.

Through a universal, direct and secret vote, but with the power to choose within social sectors, 168 MPs will be elected to the ANC from the following sectors: 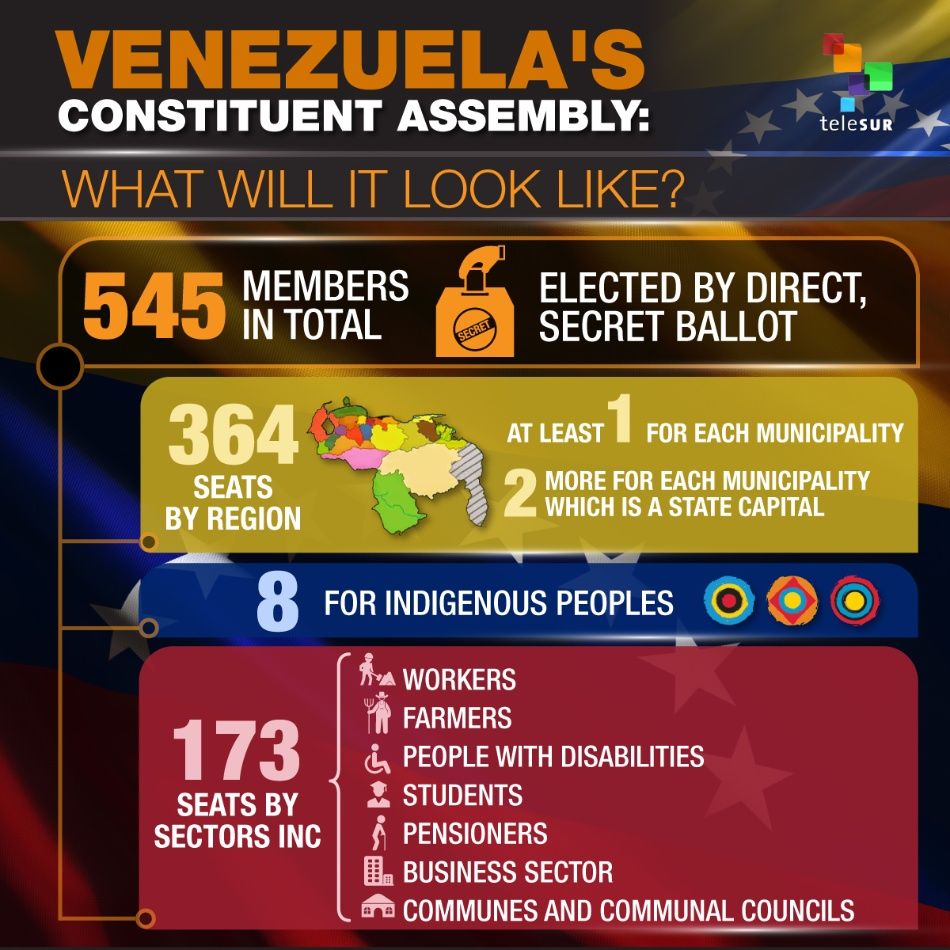 This process of sectoral choice is somewhat more intricate. It allows for key social sectors to be represented at a national level in the Constituent Assembly. In this field, the election will take place according to the following distribution: peasants, fisherfolk, people with disabilities, entrepreneurs, pensioners, students in the country and workers. The candidates will be elected in national lists, according to the principle of majority representation: whoever gets the most votes will be elected on the national lists.

If Maduro really was interested in the will of the Venezuelan people, he could simply call for elections.

The constituent representatives of the communes and communal councils will be chosen regionally, according to the principle of majority representation, in all the states of the country. “It will not be by national lists, but the communal leadership in its own state,” explained Maduro.

Basically, each voter will be grouped to vote for only one of the various sectoral candidates up for election. The CNE will ask for record of the candidates from official institutions, ministries of the education, guilds and associations, in order to verify their details and add them to the ballot.

For example, if you are retired and/or living on a pension and you are not registered with the government or opposition party, you should vote for candidates from the pensioners’ sector. If you are a public or private employee, you will probably have to vote between Chavez candidates or working class opponents. Instead of voting for “the Indigenous candidate” without being Indigenous, there is now the option to vote for candidates according to sectors. In order to preserve the principle of one person, one vote, no voter may vote for in more than one sector.

Candidates may be nominated in one of the following ways:

In order to run for office on their own initiative, 3 percent of voters registered in the electoral registry of the municipalities are required to elect the constituents. In the sector category, the candidates will be nominated by the corresponding sector and should receive the backing of 3 percent of the sector to which they belong.

To be nominated as a candidate for the national constituent assembly, you must:

At the sectoral level, it is necessary for candidates to present proof that they belong to the sector they wish to represent.

A Note about the Method

Contrary to what Venezuelan and international anti-chavistas have denounced, the constituent national assembly will not be a “closed election among chavistas.” The methodology is rigorous and is focused on the diverse structure of a constituent parliament, understanding that it not only recognizes the territorial matrices of representation, but also those of sectors that are socio-demographically representative and in majority majority of Venezuelan society (such as youth, working class and pensioners). 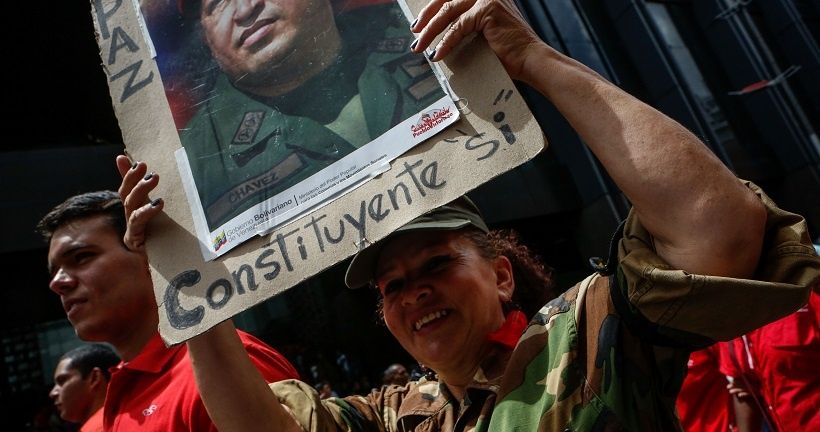 The universal, direct and secret mode of voting is preserved, and a supposed process of election in the second degree is denied. There is also another relevant fact: the regions and municipalities continue to have the greatest weight of weight with 364 assembly members elected through this modality, which preserves the municipalities as political-administrative units for the commission structure. A question that the matrix disproves about the creation of a system “rigged” to favor chavismo.

There are no adverse conditions for Venezuelan anti-Chavismo to be measured in the Constituent Assembly. In the leadership of the MUD they declare themselves a political and electoral majority in the entire national electoral territory, in the vast majority of municipal districts and in all social sectors. In fact, Julio Borges has said that Chavismo is today a political minority of only 10 percent or 12 percent of the country.

These affirmations and the refusal of the MUD to be measured in the “all or nothing” of the Constituent, now appear disjointed against the methodology presented by Maduro.