Venezuelan Youth Burned for ‘Being Chavista’ Dies from Injuries 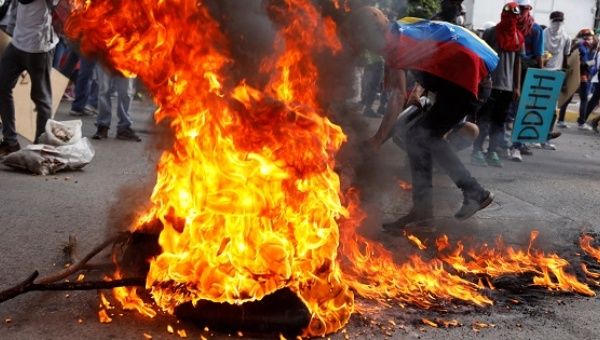 Orlando Jose Figuera suffered burns on 80 percent of his body in a heinous attack the government has dubbed a hate crime.

The Venezuelan youth who was beaten and set on fire by violent anti-government protesters in Caracas two weeks ago has died from his injuries, government officials reported Saturday night.

Orlando Jose Figuera was burned alive on May 20 in Caracas’ Altamira neighborhood, one of the capital’s affluent areas, after opposition protesters suspected that the 21-year-old Black man was a government supporter.

“Orlando Figuera, stabbed and burned alive by minds diseased by hate in Altamira on May 20, just died of cardiopulmonary arrest,” Villegas wrote, adding that international mainstream media has continued to paint the opposition protests as “peaceful” despite cases like Figuera’s.

Figuera’s mother, Ines Esparragoza, blamed the opposition for the tragedy and her son’s suffering ahead of his death in a video shared on Villegas’ Twitter, saying as she began to cry that the attackers treated her son like an animal.

“Why does (National Assembly chief) Julio Borges allow this, and (opposition leader) Henrique Capriles allow this?” she questioned.

“Who am I going to blame?” she continued. “The opposition. Because they are the ones that threw gasoline on my son like an animal … if it wasn’t my son it would have been someone else.”

Figuera suffered first and second degree burns on 80 percent of his body, as well as stab wounds in various parts of his body.

“Orlando Figuera beaten, stabbed and burned alive by ‘demonstrators’ is the symbol of hate crimes in Venezuela,” Saab wrote. “As long as the Venezuelan justice system fails to give maximum sentences against murderous lyncher, hate crimes will increase.”

Maduro had condemned the attack after the incident in his weekly television program two weeks ago.

“A a person was set on fire, beaten up, they stabbed him four times. They hit him and nearly lynched him, just because someone shouted out that he was a ‘Chavista’ … or because of his skin colour,” Maduro said. “Is that what we call opposition? Is that what we call democracy; we call this politics?”

More than 70 people have died in incidents linked to the ongoing protests since regular anti-government marches aimed at forcing out the Maduro government broke out two months ago, often spilling over into incidents of violence.