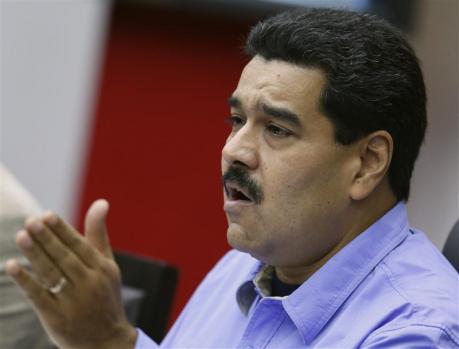 (QVENEZUELA) – Venezuela’s President Nicolas Maduro said a stricter wave of inspections for suspected price-gouging would begin on Saturday in an aggressive pre-election “economic offensive” aimed at taming the highest inflation in the Americas.

“We’re not joking, we’re defending the rights of the majority, their economic freedom,” Maduro said on Friday, alleging price irregularities were found in nearly 99 percent of 1,705 businesses inspected so far this month.

Maduro, who has staked his presidency on preserving the legacy of late socialist leader Hugo Chavez, launched a theatrical – and often televised – wave of inspections this month to force companies to reduce prices.

He says “capitalist parasites” are trying to wreck Venezuela’s economy and force him from office.

Opponents scoff at the measures as cheap and short-term populism that is hiding the failure of Venezuela’s socialist economic model and intended to win votes at an upcoming poll.

Economic problems, including inflation running at an annual 54 percent and shortages of basic products, have been Maduro’s biggest challenge since taking office in April.

“The inspections are continuing daily and have let us see into the under-world of capitalism,” Maduro said in his latest speech to the nation, warning of severe sanctions starting Saturday against businesses maintaining unjustifiably high prices.

Government officials say companies have been marking up prices by as much as 1,000 percent over cost, though many retailers say they have been forced to hike prices sharply due to lack of access to foreign currency at the official rate.

The government has given a plethora of different figures on the inspections, with Maduro saying 100 retailers have been arrested but his chief prosecutor putting that at around 30.

“The government is seeking to transfer the political cost of the crisis to a third party (the businesses), while trying to give the impression it is attacking the problem,” said Henkel Garcia, of local financial think-tank Econometrica.

Maduro also announced on Friday a new decree to limit monthly rents for commercial properties, to 250 bolivars ($40) per square meter, in a bid to reduce costs passed to consumers.

And in another populist move, the president said interest rates for savers on low incomes would be hiked to 16 percent, from 12.5 percent currently.

“This is just a first step to reward savers,” Maduro said.

The leader of Venezuela’s main business group Fedecamaras, Jorge Roig, said this week the government’s erroneous economic policies and excessive controls risk setting up the nation for a dire 2014 of shortages and stagnation.

Wall Street analysts expect growth of 1 percent to 1.5 percent this year. The government has backed off its official target of 6 percent, but has not provided a new figure.

Roig accused policymakers of “improvisation” in the face of growing economic distortions and insisted that businesses nationalized in the Chavez era were operating at half capacity, while only 2 percent of expropriated land was productive.

Having narrowly beaten opposition candidate Henrique Capriles to win April’s presidential vote, Maduro and his supporters are gearing up for a new test at the polls with nationwide municipal elections on December 8.

The opposition is painting the vote as a referendum on Maduro’s record, but any voter backlash over the economic problems may be tempered by his recent populist measures.