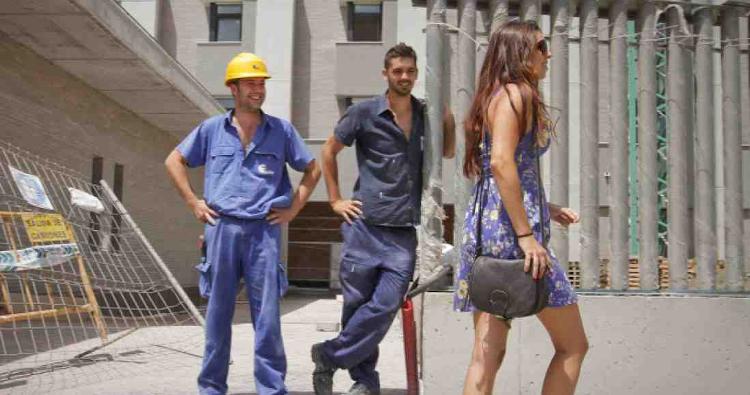 By Cynthia González, Vozdeguanacaste – One morning, Karen Diaz was walking along the road when suddenly two men stuck their heads out of a car to tell her what they thought about her body in graphic and violent terms. And that was when she was only eleven.

Now Diaz, a resident of Nosara, is 25 years old but she has never forgotten her first experience as a child with sexual harassment in the street. She says she relives the experience and faces similar scenarios every day.

“I remember that day from my childhood very clearly because it turned out to be the day that I understood how things really work around here. I lost my innocence after that ordeal, I felt ashamed of my body and there was a time afterward when I only wore loose clothing,” commented Diaz.

This problem is known as street sexual harassment or verbal sexual assault under the mistaken justification that it is a “piropo,” or compliment. The vulnerability that women feel when listening to a stranger review her body has become so customary that women choose to ignore it, as they have done since they were girls and probably will continue to do throughout their lives.

The Voice of Guanacaste decided to get the opinion on the street of 13 women and men living in the area. Some of the men interviewed recognized that it is disrespectful when what is said goes beyond a compliment, while women said they feel uncomfortable and do not walk peacefully after receiving such so-called comments (see box to read some of the comments).

Silvia Mesa, a psychologist at the Research Center for Women’s Studies (CIEM) at the University of Costa Rica, explained how this unwanted behavior comes from a historic custom in Costa Rica.

“Many times men justify their actions when they see that some women do say they love when they are told these things but that also stems from a society like ours in which we have been taught that we depend on what others tell us for approval,” commented Mesa.

Currently, in the country there is no clear regulation to denounce and punish these kinds of situations due to how difficult it is to identify the person who walks quickly beside a woman while making some sexual reference or the driver who shouts something to a woman while the car is moving at a high speed.

The cases where these actions could be considered a criminal offence are those where there is unwanted physical contact, which can be proved at a flagrancy office, presenting the person who disrespected the woman, either because a police officer saw the act and detained the individual or because the woman managed to detain him at the time and call the police.

However, regarding verbal aggression, which is the daily bread of many women, it is often overlooked since it can’t be verified.

“These cases are definitely very difficult to prove, so they are not punished, leading women to simply get used to it and contributing to how these actions become more socially acceptable with each passing day,” says Mesa.

The Voice consulted the Tourist Police of Guiones Beach about how to act in these cases. Chief Kevin Salas responded, “At the moment that a person is disrespected in the area, the victim can come to our office, describe the individual who performed the action, and we proceed to follow up if he is still found in the area indicated by the victim and we take his information so she can file a complaint and proceed with the legal investigation process.”

The silence of women who face verbal abuse can become the main weapon against them, contributing to this situation never changing. “A custom must start of disapproving of these actions that affect our mothers, friends, wives, sisters, girlfriends, daughters, nieces and granddaughters, for the benefit of their personal welfare and peace when walking,” urged Mesa.

What Do You Think of Catcalls and Insinuations?

“To me, they say ‘adios, blondie’ and ‘what a beautiful blondie.’ Sometimes you tell them thanks. What I don’t like is when they have intentions or a tone of malice like ‘hey mommy.’” Evelyn Suarez Arce, Cuesta Grande

“Unless it’s going to be a pleasant compliment, why say something disagreeable? It’s either a sweet compliment or it’s better not to.” Olger Montiel Perez, Nosara

“For my part, I don’t say those things to women and if I were to say it, I would say it with intentions of winning her over.” Taylor Herrera Mendoza, Nosarita

“If it’s an insinuation, you feel bad and it also makes you mad, but if it’s a nice compliment, it boosts your self esteem.” Jenifer Ramirez Arce, Nosara

- Advertisement -
Paying the bills
Previous articleWhere’s The Party!
Next articleThere Is No Simple Answer To…