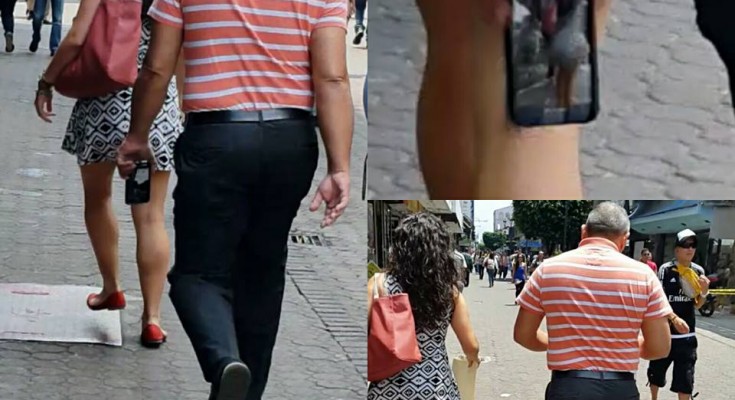 QCOSTARICA – The hunter, hunted.  A “viejo verde” (dirty old man) was caught videoing up the dress of a woman, unaware, walking in downtown San Jose.

This all happened in the area of Avenida Central, the boulevard, when the middle-aged man was spotted walking behind an innocent girl in a dress, with his cell phone pointing at her buttocks, low enough, presumably up her dress.

Click here to see the video of the “viejo verde” in action.

Unaware, Gerardo Barquero Cruz caught the action on his own cell phone camera,making his own video of the man in action, then confronted, challenging him to show his face.

The video was immediately posted on Facebook, where in the first hours got more than 300,000 views.

Gerardo also took the time to warned the girl (whose face is never shown to the camera) of what had just happened and tried to call a police official. “Nunca hay uno cuando necesitas” (never one around when you need one), can be overheard by Gerardo,  as he desperately looks around for a police official.

Finally the “sexual predator”, as he is referred to in the post, gets into a taxi after trying to flee on foot