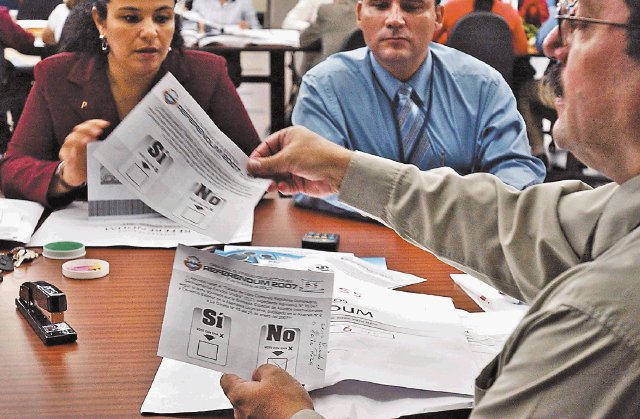 In nine months, in February 2014, Costa Ricans will take to the voting booths and elect a new president and surveys indicate that the likely winner will be “absenteeism”. But, absenteeism does not run the country.

The poll shows that majority of those in the 60% are between the ages of 18 and 40, academics and workers who are wary of the candidates and sick of hearing about allegations of corruption, cronyism and despotism in politics, preferring to sit out the election by not giving their vote to any candidate or party.

In a survey by the University of Costa Rica (UCR), “Actualidades 2012”, the percentage of abstainers shows it could even be as high as 70%.

“In short, people positively value the next national elections, but do so in anticipation of a growing abstention, questioning of the transparency of the Supreme Electoral Tribunal (TSE), a poor contribution of political parties to resolve national problems and a strong leader who can occupy the presidency, ” the survey states.

Analysts explain that absenteeism could be divided into three groups: those who for any impairment or disability do not attend the polls, those who do not vote for exercising “political protest” and those who are not interested in politics, nor what happens in the country.

“Those who will not vote for political protest, are those who are not satisfied with the flaws of Costa Rican democracy, with political parties or who feel slighted by the political class, of broken promises, abuse of public institutions, people who are tired of lining up at the Social Security Fund (CCSS) to get access to medical services, or have build up some inner rage”, says political analyst Francisco Barahona.

Increasing the phenomenon of absenteeism, is the division that exists in the opposition. The lack of a united opposition against the  Partido Liberación Nacional (PLN) creates a sense of hopelessness in these people, which could lead them to not vote.

In 2010, the fact that Laura Chinchilla was the first woman presidential candidate reduced absenteeism, but this is unlikely to continue, what may occur in fact is an even higher rate of absenteeism.

This will be even more so if the opposition parties fail to get a “major” candidate and unite to oppose the PLN candidate face-to-face.

If there is not a united opposition there will be even more absenteeism. However, if the opposition can form a coalition, the fight for the presidential chair will be serious, according to analysts.

By Amy Gdala, Guest Contributor - The US has a surplus of vaccines, while Costa Rica is struggling to supply sufficient numbers to citizens...
Latin America

QTECH - Whether due to the global economic crisis caused by the Covid-19 pandemic or due to shortages of electronic components, raw materials, factory...
Reports