Not wanting to repeat the “brou·ha·ha” and near stampede of last year, Walmart decided to use armed security to prevent abuses during its midnight event on Friday.

This was most notable at the Walmart in San Sebastian, in San José, where a riot almost broke out last year, when angered customers demanded the store honour the ticketed price on a television set, during it’s “lowest price of the year’ promotion.

The chain said that the price tag had been tampered with. However, the Comisión Nacional del Consumidor didn’t see it that way and fined the the company ¢4.395.000 colones (US$8.900 dollars). 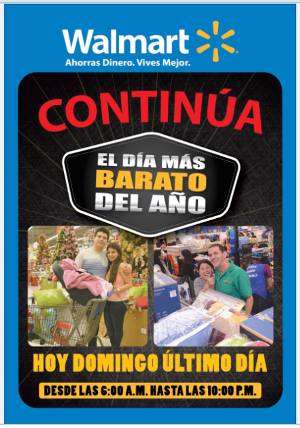 This year the event was coordinated and the store hired private security for a “safe and comfortable customer experience”, according to Lupita Mora, spokesperson for Walmart’s corporate affairs.

Another change this year was, in addition to the eight Walmart stores, the inclusion of 26 MaxiPalí stores, operated  by Walmart.

The move diluted the flow of customers at Walmart stores, as they sought the low prices at more outlets.

Also, this year, the chain did not keep its stores open around the clock for the promotion weekend.

And with still two weeks before the “aguinaldo” hits consumer pockets, the “El Día Más Barato Del Año” (lowest priced day of the year) promotion this year is lukewarm as compared to last year, when it held its promotion on December 1 rather than the middle of November.

With notes from La Nacion

QCOSTARICA - Costa Rica's economic activity registered in April 2021 a year-on-year growth of 8.8%, a figure affected by a “base” or “rebound” effect,...
Entertainment