Was It Negligence Or An Accident? 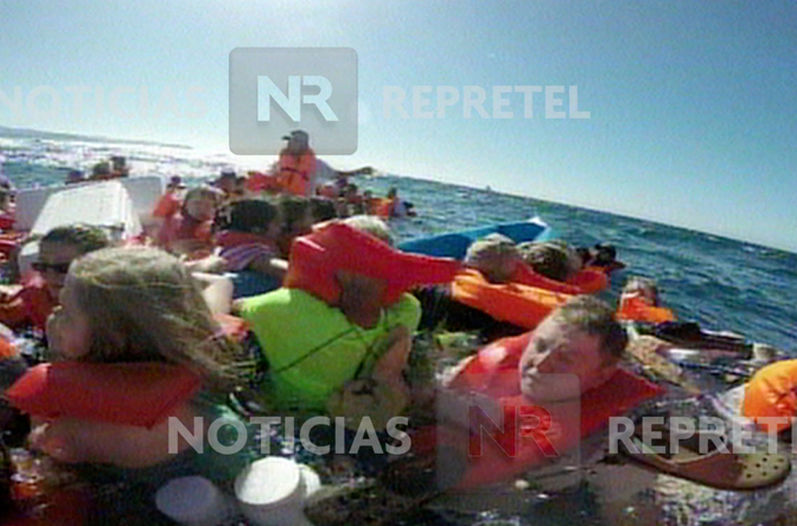 The evidence of the shipwreck, while on a trip to Tortuga Island from Herradura, north of Jacó, carrying 109 people on board lies in 150 metres (500 feet) deep in the Pacific ocean.

The EcoQuest boat sank Thursday morning when wind gusts of up to 60 km/h, and heavy swell, caused water to enter through the open windows of the first deck, is the reason for the sinking as narrated by a number of the 106 rescued passengers.

Survivors told authorities that the vessel “sank in seconds”. In the water there remained no trace of the boat.

In the shipwreck three tourists lost their lives. They were identified by the Organismo de Investigación Judicial (OIJ) as Sharon Johnston (70 years) from Canada, Edna Oliver (68 years) from the United States and 80 year old Ivor Stanley Hopkins, from England.

Private fishing, yachts, Coastguard boats, Cruz Roja (Red Cross) and Bomberos (firefighters) came to the rescue of the 106 in minutes after the alert. Some were in the water for up to two hours, said Hector Chaves, head of the Bomberos.

Now comes the investigation phase, to learn what really happened Thursday morning, when the PuraVida Princess catamaran set off the Herradura beach on its regular scheduled tour of the Pacific island.

The Ministerio Publico (Prosecutor’s office) in Garabito has assumed the investigation to determine “whether or not there was negligence on the part of the captain of the vessel or other persons.”

OIJ agents interviewed the survivors and ordered an alcohol testing of the captain, a 36 year old man identified only by his last name, Tenorio Gutiérrez and his assistant (whose identity was not obtained).

The tests came back negative. The two were taken to the prosecutor’s office for questioning and later released.

The Ministerio Publico must now determine if there was a crime committed or whether it was merely an accidental situation.

The EcoQuest catamaran, with the registration number P-11400, was built in 2007 and belongs to the company Global Trust Firm S.A.

The tour, TORTUGA ISLAND CRUISE and the website, TORTUGAISLANDCRUISE.COM  was operated by Jaco VIP, according to the domain name registration records at Godaddy.com.

The Ministerio de Obras Públicas y Transportes (MOPT) confirmed that the boat had all its permits of seaworthiness, issued last November 6 and valid until October 31, 2015.  The Instituto Nacional de Seguros (INS) – state insurer – confirmed that the boar carried two insurance policies, but did not disclose the details of the coverage, for confientiality reasons. 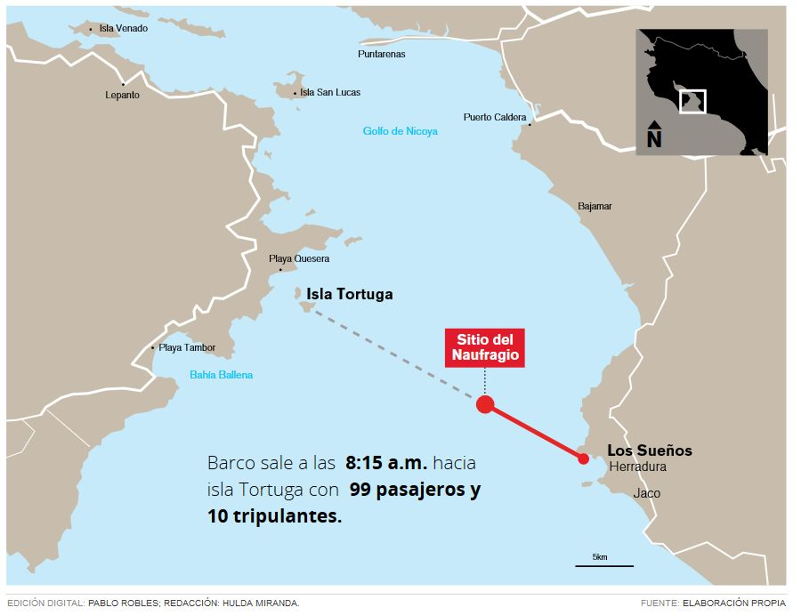 Since the boat lies in 150 metres of water, Hector Chaves explained that they would need a submarine, lamenting the country does not have one. “A diver with special equipment and well prepared can reach up to 30 metres deep,” said Chaves.

At Casa Presidencial (Government House in San José), acting President Ana Helena Chacón, said: “We confirm that are no missing persons and therefore the government does not have the resources to take the boat from the sea. We do not know if the company will assume the cost, since we have not been able to communicate with them.”

- Advertisement -
Paying the bills
Previous articleWendy’s Shut Down In Costa Rica, Leaving 110 Out Of Work
Next articleGovernment Restricts Import of Cheaper Rice To The Country