“We Are All Guanacaste and They Will Never Separate Us”, Presidenta Laura Chinchilla 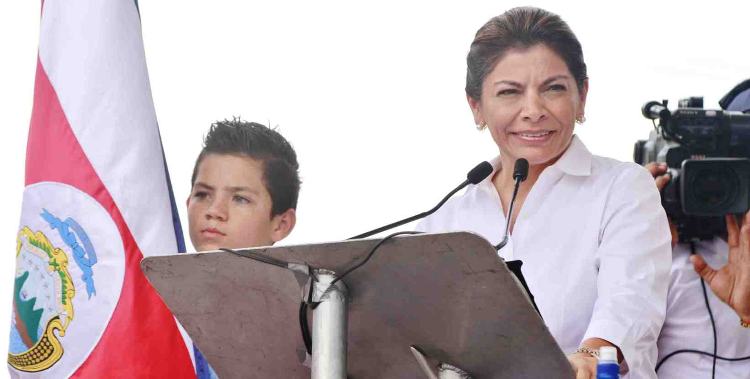 By: Wilberth Villalobos Castrillo, Vozdeguanacaste –  Just as on July 25, the streets of Nicoya again filled with hundreds of protesters marching, but this time instead of marching against President Laura Chinchilla, they joined her in the “March for the Homeland.”

The march was organized by various social groups and by the Municipality of Nicoya to remember the historic gesture of the annexation of the Party of Nicoya to Costa Rica. The march started at around 10 a.m. outside the Nicoya courthouse. From there, about 3000 participants marched to the Recaredo Briceño Park amidst cries of “long live Guanacaste and long live Costa Rica!”

Once they reached Recaredo Briceño Park, President Laura Chinchilla showed up and signed a document titled “Manifesto of the Reconfirmation of the Annexation,” along with the mayors of the municipalities of Abangares, Cañas, Tilaran, Liberia, Nicoya and Nandayure.

In her speech, Chinchilla mentioned, “some people are of the opinion that I should not be with you today. To them, I should say that the towns of the Party of Nicoya have historically said yes to Costa Rica and that is why today we are telling Guanacaste yes.”

The president had something to say to Daniel Ortega, president of Nicaragua: “Costa Rica does not accept falsehoods, invasions or bullying. We demand respect from President Daniel Ortega and we repudiate the contempt toward our sovereignty.”

Chinchilla referred to the invasions made by Nicaragua to Costa Rican territory in the area of Portillos Island and Nicaragua’s attempt to claim part of the ocean territory in Salinas Bay in the Pacific and San Juan del Norte in the Caribbean.

“We are talking about the government of Nicaragua tyring to take from the country about 20,000 square kilometers of sea in Salinas Bay and between 15 to 17,000 kilometers in the Caribbean Sea, which are the areas richest in marine biodiversity and fishing in the country,” she explained.

The leader ended her dissertation with the following statement: “President Ortega, we will not allow your irresponsibility to separate our towns. I have the duty and the right for Costa Ricans and Nicaraguans to live in peace… never distorting the past. We are all Guanacaste and they will never separate us.”

For his part, the Guanacaste  legislator Luis Fernando Mendoza, president of the congress, began his speech by reciting the stanza “My spirit never dies because it was born next to a corral,” from the popular song Espiritu Guanacasteco (Guanacastecan Spirit)

Mendoza stated that “Guanacaste and Costa Rica are an undividable marriage.”He said,”I may be President of the Legislative Assembly but first and foremost I am Guanacastecan.”

A large number of students from the canton of Nicoya were present since their schools declared it a day off so both students and teachers could participate in the event.

However, the mayors of Bagaces, Carrillo, La Cruz and Santa Cruz were absent and of the legislators from Guanacaste, only Luis Fernando Mendoza was there. At the end, Luis Gerardo Castañeda, mayor of Liberia, suffered a brief dizzy spell, so he had to remain seated and receive medical attention, after which his health recovered.

QCOSTARICA - The news of the reinstatement of the...
Lighter Side