Where do English Teachers Live in Costa Rica?

Costa Rica English Teaching News – One of the most common queries about teaching English in Costa Rica is the question of where a teacher will be living. It’s clear why this ranks high on the list. Among other things, when someone is thinking about a life abroad, they like to imagine what their apartment will look like and where it will be situated. 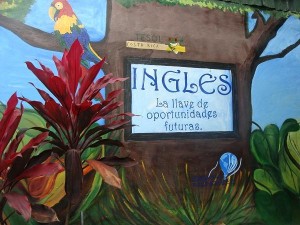 While dreams of living on a Costa Rican beach and watching the sun set over the ocean every night might be realistic for some, it is not a realistic expectation for an aspiring ESL teacher.

Ninety-five percent of ESL jobs in Costa Rica are found in the Central Valley. The few jobs that do exist outside of the valley are with very small institutes and teachers earn a very minimal wage or are actually volunteers. This is especially true in tourist rich areas like beaches, where schools do not have to entice teachers to come, and can simply take the ones who are willing to offer their services for little to no pay.

With this said, if money is less of a factor than comfort and surroundings, the available positions outside of the valley will suit you just fine. In addition to this there are more lucrative private school options, such as the Falcon International School just outside of Jacó Beach. These schools generally have great benefits and competitive salaries to institutes in San José, but are extremely competitive and available positions are far and few between.

For the other ninety-five percent that will be working in the valley, the options are plentiful.

San José represents almost all of the capital’s metropolitan area. However, once more acquainted with the area, you quickly realize that there are actually many different regions, towns and neighborhoods that have their own uniqueness – and Ticos will be quick to correct you for incorrectly calling an area San José that is not.

Case in point can be found with the airport. Any local will interrupt you before you even finish saying that the airport is in San José – it`s actually in Alajuela. So while living in or around the capital will be your most likely destination, in all likelihood you won’t be living right in San José.

With Cartago, San Pedro and Los Yoses in the east, Heredia to the north, and La Sabana, Escazú, Santa Ana and Lindora to the west, there are many great options for living. Where you end up should mostly, but not entirely, depend on where you find work.

In the ideal scenario you would be able to stay in a low-risk environment, financially speaking, such as a hostel while you carried out your search for employment. This way, you would be able to apartment hunt with a general understanding of where your school is located. While certainly not an end of the world scenario, the constant high volume of traffic and precipitation during the rainy season make commuting longer than necessary distances an annoyance worth averting if possible.

If the hostel option is not viable, most language schools are located in Escazú, Heredia or San Pedro so apartment hunting right off the bat in these areas would be safe bets.

In terms of cost, as a general rule the further west you go the more expensive rentals become. Santa Ana and Escazú, while beautiful and more ‘Americanized’ – especially in the case of Escazú – are expensive. The same goes for La Sabana, which is also extremely beautiful, centrally located and home to La Sabana Park, one of the city’s biggest attractions.

San Pedro is a college area with lots of Universities and bars. Rent is quite affordable and many younger teachers prefer to reside here. Heredia, located just north of San José, is the most economical option. Rent on two bedroom apartments can be had for little, but the downside for some is it is not as lively as other places and lacks things to do in the evening. Though, for some, this is a positive.

The San José area is where most English teachers in Costa Rica settle. Where they actually live, though, is usually not right in San José. The options are plentiful and diverse. A little research and exploration when you’re on the ground will serve you well.

If you want more information about teaching English in Costa Rica or getting your TEFL or TESOL certificate in Costa Rica feel free to contact Andrew at the Global TESOL College or email andrew@globaltesolcostarica.com

Originally from Toronto, Canada, Woodbury is the academic director of Global TESOL College Costa Rica , a contributor to radio program This Week in Costa Rica (http://thisweekincostarica.com/), and an independent writer based in Costa Rica.