Members of the brutal street gangs widely known as Maras continue to wreak havoc in El Salvador, Guatemala and Honduras — but why haven’t they taken root in Costa Rica as well? 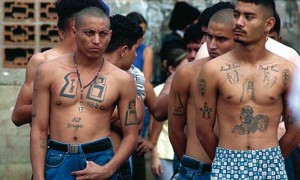 MS-13 and M-18, the two strongest and most widespread Mara gangs, were spawned in the 1980s in poor Los Angeles neighborhoods by disaffected Central American youth. Most were transplanted to the US by their families, desperate to flee civil war and extreme poverty in their home countries.

In the 1990s, strict deportation laws were enacted and thousands of Central American criminals were sent back to their native countries, hardened by American jails and instilled with a mature gang culture. Back at home, weak and corrupt governments provided fertile ground for the proliferation of these Maras, which have turned their countries into some of the most dangerous places in the world.

But at the same time, Costa Rica has largely been spared the violence associated with these feared groups. Here, street gangs are mostly dominated by small, local factions competing for territory in poor neighborhoods with few ties to international criminal networks.

Costa Rica has long been a relatively peaceful refuge surrounded by nations with tumultuous pasts. During the years when the Maras were taking shape in LA, there was no such exodus from Costa Rica; the country was relatively stable and was ruled by a democratic government. That stability also helps explain the absence of Maras in Nicaragua, since many of its citizens fled south across the border amidst that country’s civil war, away from the influence of gangs spreading in California.

In recent years, reports of Mara activity in Costa Rica have been few and far between. Immigration agents are known to deny entry to persons bearing obvious tattoos or symbols related to known Maras. However, there have been a few cases which sparked fear that the gang was attempting to make inroads into the country.

One such case was the 2009 kidnapping of two men by brothers from El Salvador who were living in the town of Paso Canoas. While attempting to pick up a ransom in exchange for the release of their remaining captive, the brothers were arrested along with their female companions, and the victim rescued by police. What shocked authorities, though, was that the two El Salvadorians claimed to be members of the Mara Salvatrucha, and their tattoos seemed to confirm that fact.

Yet apart from occasional arrests, reports of coordinated Mara activity in the region have been scant. This lack of violent, well organized street gangs can be seen in Costa Rica’s relatively low murder rate of 8.9 per 100,000 members of the population as opposed to 25 and 85.5 in El Salvador and Honduras in 2012 respectively.

But Costa Rica is by no means free from the grips of organized crime, and violence is on the rise. Although lower compared with its unstable neighbors to the north, Costa Rica’s murder rate has almost doubled since 2000. Officials have blamed the increase on the large drug trafficking organizations which have set up shop in the country, not the violent Central American Maras, however.

Costa Rica has become a major warehousing and transshipment point for South American cocaine, where organized networks have already been established by the Mexican and Colombian cartels seeking to exploit the country’s stability and geography.

Police routinely uncover large caches of drugs near the coasts, borders and even in the capital of San Jose itself. In May, police found nearly half a ton of cocaine hidden in a semi-trailer which was waiting to cross into Nicaragua. And just last week, a boat was detained in the Pacific, near Isla del Coco, and found to be carrying one ton of the drug. This latest bust was the second time the same vessel had been caught with almost 1,000 kilos on board. The sheer size of shipments like these suggests that traffickers feel very comfortable in the area and that local authorities are perhaps complicit.

These large seizures are relatively common and growing in quantity from a total of less than three tons in 2002 to more than 15 tons in 2012. Soon after being elected, President Lara Chinchilla expressed concern about the threat of drug cartels operating in the country telling the BBC that, “It’s a problem that will get out of hand if we don’t confront it now.”

The threat of more drug violence in Costa Rica is real, but at the moment, the vicious Mara gangs of El Salvador, Guatemala and Honduras do not seem to play a major role in it. With the increase in drug trafficking activity in the country, it remains to be seen if Costa Rica can continue to stave off the encroachment of these brutal gangs.

Today, Wednesday, June 9, only EVENS can circulate. The measure is countrywide and applied between 5:00 am and 9:00 pm, save for those under the...
Reports

QCOSTARICA - Faced with wasting a vaccine dose when people in the priority groups scheduled do not show up, and a substitute cannot be...
Environment