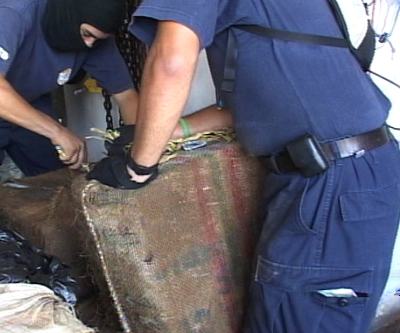 Boat with drugs is detained in high seas for the second time in eight months.

This is the second time in the last eight months that the boat named Capitán Erson, flying a Costa Rica flag, has been found to be carrying illegal drugs.  The boat was previously seized last November when the U.S. Coast Guard discovered in its hold 1,081 kilos (2,381 lbs.) of cocaine, the minister said.

On Monday Capitán Erson was crewed by two Costa Ricans and a Nicaraguan, Minister Zamora said.

The vessel was detected Sunday between Costa Rica’s Isla del Coco (Cocos Island) and the Ecuadorian archipelago in the Pacific. Zamora said he had no idea why the Costa Rican court returned the boat to its owners.

The illegal drugs were tightly packed in 80 bales, say authorities.

The two Costa Ricans, identified by the last names Piedra Quesada and Guzmán, will be turned over to Costa Rican authorities to be judged by our laws, according to Zamora, who is hopeful this time around Costa Rica’s courts will permanently seize the boat so that it may not serve again as a medium for this type of crime.

Costa Rica and the United States maintain in force a joint surveillance accord in the Caribbean Sea and the Pacific Ocean.