I Will Never Get Tired of Raising My Voice For Peace, Oscar Arias

The 2014 PeaceJam Conference at UConn (March 14-16) gave an opportunity for students to gain leadership skills, mentor youth, and to learn what it means to work for peace from Nobel Peace Prize Laureate Oscar Arias, former President of Costa Rica.

The goal of the weekend was to inspire youth to be the change that they want to see in the world through the mentorship of college students and inspiration of  Oscar Arias.

The PeaceJam Foundation recruited the two-time president of Costa Rica, Oscar Arias and 11 other winners of the Nobel Peace Prize to work with young people to carry out community-service projects and study nonviolent ways to stand up to injustice, both in their lives and in the world at large. 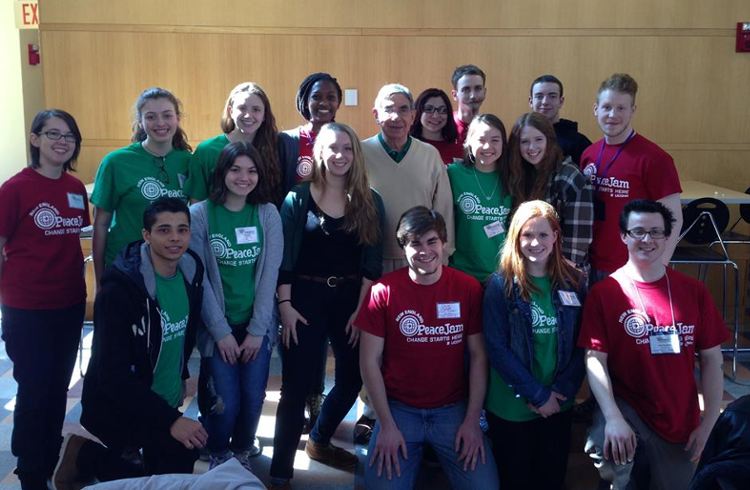 This was Arias’ second appearance at UConn. In 1995, he attended the dedication of the Thomas J. Dodd Archives and Research Centre at Storrs, also attended by former U.S. President Bill Clinton.

On his Facebook page, Arias published the text of his closing speech:

I WILL NEVER GET TIRED OF RAISING MY VOICE FOR PEACE
[quote]My fellow Laureate Nelson Mandela, whose passing has left such a void in the world, once wrote that “there is nothing like returning to a place that remains unchanged, to find the ways in which you yourself have altered.”I know what he means, because I have traveled a good deal in my life, and I always like the feeling of coming home a slightly different person than I was when I left – a person with a new kind of hope, or a new source of inspiration, or a new way of looking at the world.

I know that I will have all of those things when I return home to Costa Rica after this event, because I cannot tell you how impressed I am by your Global Calls to Action.

I only wish that we could put you on a plane right here and now to the United Nations, or the U.S. Congress, or any number of parliaments and international organizations. Benjamin Franklin said we are “too old too soon, too wise too late.”

He must never have met young people as wise as the ones who presented their proposals to us this weekend.

What you are doing is not easy work, because you are not just talking about peace. You are putting yourselves on the line and attempting to bring about real change.

To paraphrase Henrik Ibsen, when you go out to fight for freedom and truth, don’t wear your best pants. It’s tough, and messy, and frustrating. But for people like us, who refuse to stand on the sidelines when so much is at stake for the future of humankind, there is no other way.

When I feel tired or wish I could forget about the problems that lie outside my door, I hope my thoughts will turn to you: a group of young people who, instead of focusing only on their own lives as so many of us do, insist on thinking of others. And I hope that when each of you hits a rough patch on your own path to peace, you will also find strength in remembering the people you met here.

When I got started in politics, I certainly had a few years on you, but some people thought I was too young to have such big goals. They thought I should be patient, or wait my turn. This is true in some parts of life – if you want to perfect your skills, or earn someone’s trust, or achieve a difficult goal, there are no shortcuts.

But I want to tell you that when it comes to making the world a better and more just place, please, never wait your turn. Never be patient. Never allow anyone to tell you that you are too young or too unimportant to speak up.

That person is probably the one who needs to hear you the most. I will never get tired of raising my voice for peace – and I am so pleased to know that when I hear other voices shouting right along with me, making some noise in New England, it’s a sign that PeaceJam is going strong.  [/quote]