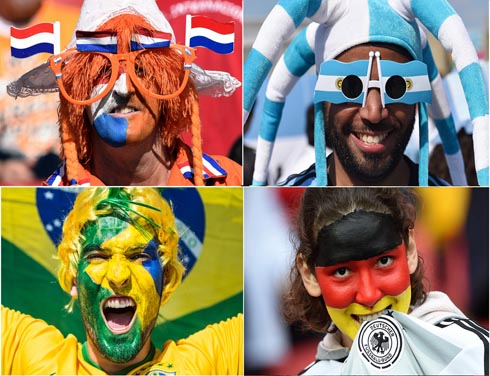 COSTA RICA SPORTS NEWS – The surprises are over. After many surprises and dramatic quarterfinals, four soccer powers will appear in the next round: Brazil vs. Germany, Today (July 8) and Argentina vs. the Netherlands, tomorrow (July 9).

Four of soccer’s historical powerhouses – Brazil, Germany, Argentina and the Netherlands – will play for spots in the championship match of the 2014 World Cup. The four other teams that lost to them respectively in the quarterfinals – Colombia, France, Belgium and Costa Rica – have headed home, celebrating what was and what could have been.

Brazil is set to play Germany in the first semifinal, at the Belo Horizonte’s Estádio Mineirão on July 8. Both teams survived hard-fought victories against slumbering rivals that woke up in the final minutes of their quarterfinal matches.

At the Fortaleza’s Estádio Castelão on July 4, tens of thousands of Brazilian spectators chanted to drum beats and horns, drowning out the few Colombian voices in the stands. Brazil won 2-1 but was jolted by the loss of Neymar, who was carried off the field in a stretcher after Colombian defender Camilo Zúñiga kneed him in the lower back.

Neymar’s lumbar vertebra was fractured in that play, forcing the Brazilian superstar to miss the rest of the tournament and be out of action for six to eight weeks. Neymar won’t be able to play against Germany, nor will Thiago Silva, who will be suspended for that match because of yellow cards.

The Brazilian Football Confederation (CBF) has asked FIFA to investigate Zúñiga for his actions and to annul Thiago Silva’s suspension. In the confederation’s view, the Spanish referee, Carlos Velasco Carballo, gave the Brazilian captain an “unjust” yellow card.

“It’s a situation that leaves us in a difficult position for the match against Germany,” Brazil coach Luiz Felipe Scolari told a press conference. “But we have great players and, if I have to change something, I will do it and we will be OK.”

Scolari will have to find a new formation, which could include Dante, Luiz Gustavo, and either Willian or Bernard.

This could make things easier for Joachim Löw’s squad. Nevertheless, it doesn’t mean that the Germans are going into the next match as the clear favorites. They haven’t shown the dominance they displayed during their first game in the tournament.

Germany had trouble defeating France 1-0, despite its dominance with ball possession. German offensive power seems to have vanished (defender Mats Hummels scored Germany’s lone goal), and no one should underestimate the overwhelming effect of 60,000 yellow-clad Brazilian fans jeering every German move.

Brazil or Germany will face the winner of the match between Argentina and the Netherlands at São Paulo’s Arena Corinthians on July 9.

The game against the Netherlands will be La Albiceleste’s first true test in this World Cup.

The Argentines had a fairly uncomplicated draw, yet they struggled in their matches with Iran, Nigeria and Switzerland. They dominated the game against Belgium but only beat them by a score of 1-0 with a good goal from Gonzalo Higuaín, who finally played a decent game. The Argentine defense was noticeably better than in previous matches, though that was in part a result of the Belgians’ lack of attack.

The situation ought to be quite different against the Netherlands. For starters, Alejandro Sabella’s squad may not be able to counter with attacking midfielder Ángel Di María, who strained a muscle in his right thigh.

“Di María is vital to us,” the Argentine coach told a press conference.

Argentina’s second problem will be Arjen Robben. The Bayern Munich striker played a great game against Costa Rica, a team whose valiant defensive efforts led to a 0-0 draw and a penalty shootout that could have ended with an historical upset.

Even though Robben didn’t score – largely a consequence of the dazzling Costa Rican goalkeeper Keylor Navas – he was unstoppable against the Ticos. If he maintains his form, he will cause a lot of trouble for the precarious Argentine defense.

The Netherlands face the same kind of trouble with the ever-present Lionel Messi.

Even though Louis van Gaal’s team has a stronger defense than the Argentines, it also has its share of problems. In fact, the Dutch almost lost their shot at the title when Costa Rican striker Ureña dribbled past three defenders in the final minutes of extra time. Netherlands’ goalkeeper Cillessen saved the day, but it’s one thing to stop Ureña and quite another to stop Messi.

“He’s water in the desert,” Sabella said of his star player. “He doesn’t just score. The other day he played the pass for Di María to score against Switzerland. Today, when the terrain was dry, he gave us that breath of fresh air.”

After a 20-month break, this week a direct flight...