WOW! We at Q Are Absolutely Shocked!

Right there on the very front page of our most important daily Spanish language newspaper, just below sports, La Nación alleges that the United States of America has spied on its good friend Costa Rica. As reported by a Brazilian news outlet. 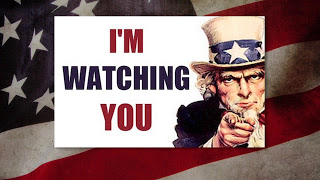 First hand, we don’t know for sure. It is supposition.

But considering the around-the-world trips of doña Laura, our president, and the plethora of national corruption, the evident distrust of the legislature of the U.S. who made such a pump up your chest big deal because a Coast Guard ship got tired cruising around the waters with a load of Tico cocaine on board and was denied to dock in order to unload the stuff. Costa Rica the apparent drug traffic darling of the north – south cartels, not to mention a “Haven for money laundering,” what the hell can you expect?

Wait there is more. And then there is the biggie: Our new best friend, the Chinese who found Costa Rica like a bride in waiting, the honeymoon was on. The Arias government started it all and ceremoniously dropped Taiwan for a better and bigger money deal whose terms and conditions which were kept a secret for almost a year. (Sounds like a U.S. free agent NBA player.)

Now the Chinese, which are not exactly the best friends of the United States are trying to make a major foot print in Costa Rica with their loans, wish list, their money, their workers, their products imported duty free of course, and their management.

The best part of the Tico government is this all comes as a “loan” and the money needs to be paid back over XYZ years. So we buy from the Chinese, import from China, a quasi Chinese company designs and manages the operation as a partner and Costa Rica is expected to pay all those bills incurred back to that nation of origin: China? (Sounds like a Ponzi scheme with a kick)

“Yes Virginia, we did fall off a pineapple truck.”

Next, Costa Rica is considering making this country the sede (Main Office) of the Chinese government in order to have an even larger foot print into Latin America such as the huge canal project ($40 billion) in Nicaragua which to this moment seems like a fairy tale.

But the main office concept could become a reality and the United States wants to know exactly what and the hell is going on in this nation of so called “Friendlies”.

I would be disappointed if the U.S. Russia, England, China itself did not spy on Costa Rica. There are just too many anomalies here to avoid. As the newsstand tabloids say, “Inquiring Minds Want to Know”.

Costa Rica has never helped itself by pretending to be a country of neutrality. It has, for years and years preached a good sermon but the realities do not bear the nation out.

We go where the money is, almost like an Eva Peron “Rainbow Tour” but then again she came back with buckets of bucks, selling out to the Nazis, ex-Nazis and fascists.

So, “Do not cry for me Costa Rica,” you should know that with all of the international activity, spying comes with intellectual paparazzi such as comes with Johnny Depp. We are viewed by the East and West plus perhaps to a lesser extent South America.  As caught in the middle .

Wouldn’t we make a great launching pad for terrorism, for cyber-war, while all the time not pressing our very own Oscar Arias’ to answer, “Who me Innocent?”

QCOSTARICA - President Carlos Alvarado said he has all the confidence in his Minister of Public Works and Transport (MOPT, Rodolfo Méndez Mata, and...
Travel

QCOSTARICA - The future of tourism operators in Costa Rica depends on the political will to approve a package of bills that favors the...
Politics

QCOSTARICA - This week there could be very good news for the country in the fight against the coronavirus pandemic if the College of...
Banking

QCOSTARICA - Sinpe Móvil is easy to use. From your phone, you can send money to friends, family and pay for things. Or receive...
Front Page