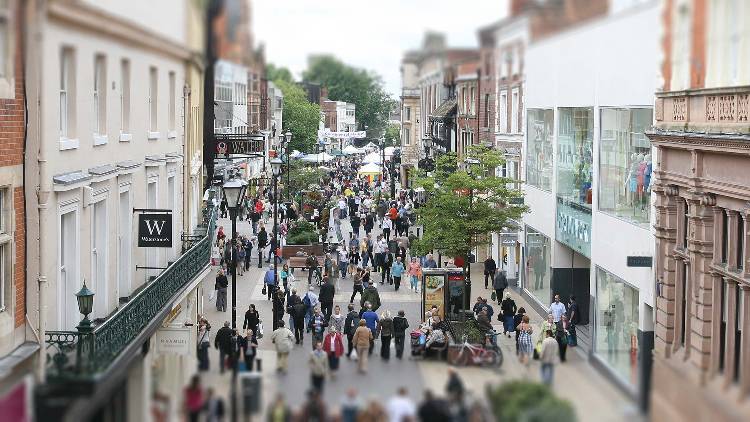 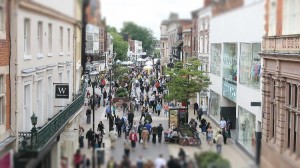 The region illustrates how demographics, growing mobile use and rising standards of living are now helping emerging economies catch up with more mature online markets.

Internet retailing is becoming a highly competitive arena which, according to Euromonitor, accounted for global sales worth $580 billion in 2012. But online spend varies greatly between regions due to varying levels of internet and mobile phone penetration, cyber security, and broadband and mobile infrastructure.

An analysis of online retailing in more than 100 countries (PDF) by the commercial property services groups Cushman & Wakefield suggests that although developed regions have hitherto enjoyed an advantage, rapid advances are allowing emerging markets to soar ahead.

And two Latin American countries are near the top of Cushman & Wakefield’s list of the fastest-growing markets for online retail sales: Mexico (4th) and Colombia (5th), increasing annual internet sales by 43.2% and 41.9% respectively.

Cushman & Wakefield’s São Paulo-based analyst Laure Maumus says that, “Latin America is catching up with more mature markets, but the actual numbers could be even stronger if the infrastructure allowed it. It has been growing its online retailing consistently, albeit not as fast as some of the Asian countries.

“Online retailing in Argentina, Chile, Peru, Mexico and Colombia is growing extremely fast and it is only really Brazil that is slightly disappointing: although the growth in online retailing sales in Brazil over five years has been 14% – in itself a significant number – there’s still resistance among Brazilians based on an appetite for malls and personal service.”

Osbaldo Franco of market research company eMarketer adds: “Rising business to consumer (B2C) commerce is making Latin America one of the fastest growing regions online in the world. Naturally, that has a lot to do with the fact that it is coming from a very low base.

“B2C commerce as a whole is usually triggered by sales of intangible goods like plane tickets, all sorts of services, which is what happened initially in Latin America – but we are now seeing the retail industry jumping in.”

Latin America has traditionally trailed mature e-tailing markets because of low of internet penetration, and this continues to suppress what advertisers spend on digital. But the region passed a significant milestone this year when eMarketer reported that for the first time a majority of its citizens were likely to use the web at least monthly.

A key factor in this growth is the take up of mobile, and all the main Latin American markets except Mexico now enjoy 100% mobile penetration, says Franco. The youthful demographic of Latin America, where UN data suggests the median age is likely to be just 28 in 2015, is also propelling mobile growth. In Mexico, for example, the statistical agency INEGI has estimated that 76% of internet users are under 35 (PDF).

Such figures suggest that Latin America could be sitting on an e-tailing time bomb and even in countries like Brazil – where according to Maumus an attachment to malls has suppressed the growth of e-tailing – a younger population is set to drive online markets. “The good news is that the largest portion of these online sales are coming from the age group under 30,” she says. “And 60% of Brazil is below 30 years of age so there is clearly enormous potential here.

“The catch up is going to be quite fast and there is recognition of this in the strategy of some retailers known for their vanguardist entry strategies, which are positioning themselves to take advantage of what they see as highly favourable demographics.”

In 2010, for example, luxury products giant LVMH blazed a trail by buying a controlling stake in Sack’s, a Brazilian online retailer of fragrances, cosmetics and toiletries.

Another factor driving mobile has been Latin America’s insatiable appetite for social media. eMarketer expects the audience for social networks to reach 324.4m by 2017.

And as the US continues to dominate the internet retailing sector in the Americas, it is likely that its big brands could enjoy a natural advantage in Latin America. Ronnie Davis, Cushman & Wakefield managing director for Americas retail research, says US retailers are mastering the delicate balance between online and offline offerings.

He says: “A lot of the work that we’ve been doing is with US-based retailers really looking at those emerging markets in Latin America, and it’s becoming very apparent that the successful retailers are those that can offer that online product in a complementary way to their bricks-and-mortar offering.”

This might suggest limited potential for European chains, but Maumus says smaller retailers are entering through franchise partners. And Franco insists that distance should not be an obstacle: “In the overall picture I think there are real opportunities even if you don’t have an office or a distribution centre in Latin America. If you are a service provider, it’s a good idea to start considering mobile as an option.”