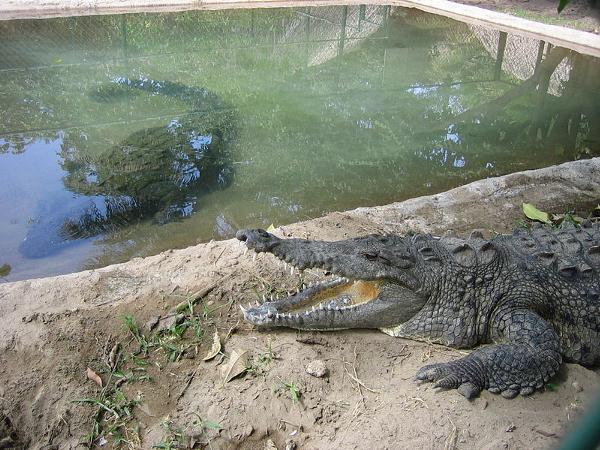 Oh those curious scientists! It isn’t enough that the Bolivar Park Zoo (in San José) visitrs are alway watching the crocodiles, but this week the zoo’s veteranarian Randal Arguedas and four zookeepers did a survey to determine their sexes.

One might think this distinction was of interest only to the crocodiles themselves — but determining the sex of the big, dangerous reptiles is a part of zookeeping — well, bookkeeping.

For such a dangerous activity, reported La Nacion, the zookeeper’s equipment is extremely low tech — a long broom to poke the scaley, toothy creatures into motion and cord to tie their legs and their lethal jaws shut.

All this must be done in silence so as not to cause stress, although the newspaper did not explain whether the stress of the crocs was being avoided, or of the zookeepers themselves.

The ones who object most to the indignity of being so examined are, of course, the younger — and more agile — crocodiles. Worst of all are those who have to be poked and prodded out of the pool for the examination.

The only reptile exempted from the exercise is Juancho, the patriarch — the biggest, oldest and most sluggish of the four-footed reptiles. His sex is known, as is shown by his masculine name and besides — he’s BIG!

It takes five strong persons to do this test: one to tie the jaws and grab the head, two to hold the beast down while still another ties the legs. A fifth performs the examination.

The swimming beasts must be irritated until they come to the edge of the pool where they are tied up and allowed to thrash until they calm down a bit. They are placed with their more tender yellow bellies upward.

The examination, performed by veteranarian Arguedas, is much like a physician examining a human male for prostate problems. Natuarlly, the cocodiles, in no forgiving a mood after being flipped over, tend to take umbriage at this indelicate invasion.

Arguedas identified two of the crocs as females and gave orders for them to be transferred to the Conservation Center at Santa Ana to accompny a male there. The others were released, in a very foul mood, to return to their pool.

Costa Rica has none of the more docile aligators found in the deep south of the United States, all are crocodiles. born surly and getting more ill-tempered as they age.

Oh, yes. If one thinks that just holding the jaws, with their rows of jagged teeth, shut is enough to ensure longevity, be advised — the lashing tail can break a leg. Jolly good sport, you know …

QCOSTARICA - What had been a good tool as a payment mechanism for sellers and businesses, the Ministry of Finance (Treasury) has in its...
Crime