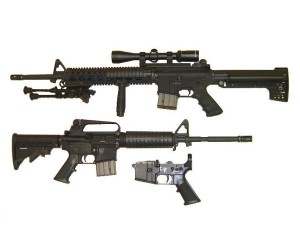 The disassembled rifles were hidden in his luggage destined for the baggage compartment of the jetliner. But a sharp-eyed Jet Blue employee discovered the attempt at check-in and alerted airport authorities.

Chief of Airport Police Glen Pacheco told the newspaper La Nacion that the passenger told him that he did not know that he had to report firearms to authorities before they were put aboard commercial aircraft.

He was charged with illegal possession of firearms. He was traveling with a Costa Rican who also missed his flight to the U.S.
U.S. regulations make sales of automatic weapons illegal so the AR-15 is offered in semi-automatic form. However, the rule is laughable — parts are sold to turn them into fully automatic weapons and can be installed by even the most ham-fisted gunsmith.

QCOSTARICA - Legislator Ricardo Benavides lashed out on Tuesday that in the midst of the efforts to advance with the covid-19 vaccines the Government...
Vaccine

QCOSTARICA - The Ministry of Health authorized the use of AstraZeneca's Covid-19 vaccine on Friday, based on the conditional marketing authorization of the European...
National

QCOSTARICA - Costa Rica will extend the restrictions of its land borders until April 1, confirmed Casa Presidencial (Government House) on Thursday. As in the...
Employment

The filming of the second season of the reality show “ReverseD” on the Discovery Channel officially began last Sunday, February 21, in Atenas, in...
Today Costa Rica

TODAY COSTA RICA - Before the Office of the Comptroller General (CGR), the rate agreed by the Municipality of the canton of San Carlos...
HQ