19 dead and 45 injured in traffic accident in Waslala, Matagalpa 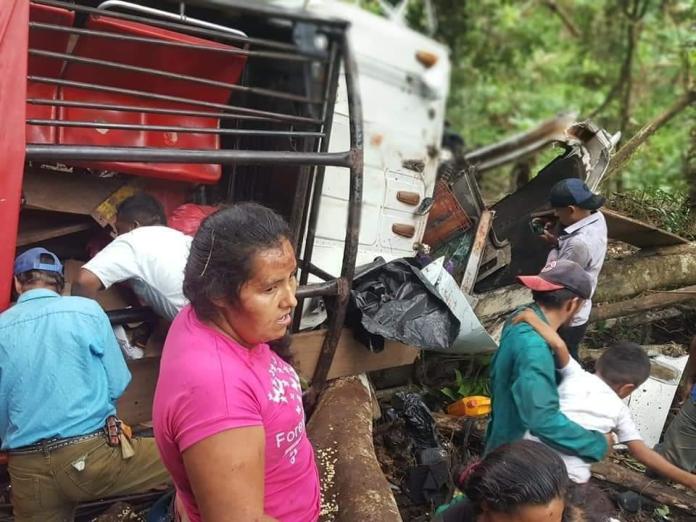 TODAY NICARAGUA – The overturning of a truck left 16 people dead and 45 injured in the community of Ocote Tuma, in the municipality of Waslala, on the North Caribbean Coast, the same area that was affected by the recent hurricanes.

Germán Vargas, mayor of Waslala confirmed the number of fatalities at the scene, detailed the official Radio Ya.

Vargas added that the causes of the accident could be due to a brake failure of the cattle truck that, apparently, was used converted to and used as public transport.

“In the area of ​​La Montañita, a truck with mechanical failures lost its brakes, the driver lost controlled and flipped,” said Pedro Haslam, political secretary of the FSLN.

The images are shocking. Children, women and seniors are among the fatalities. Of the 16 deceased, 7 are minors.

Designated Vice-President Rosario Murillo, who referred to the accident on Monday night, confirmed that there were 17 people dead. She also said that there were 22 people injured, of which four are “in critical condition.”

However, the Orteguista Police released a statement minutes later in which they asserted that there were more people injured than Murillo said and who were transferred to the Fidel Ventura Hospital in Waslala. Hours later, around 11:00 pm, local media announced that two more people had died due to the accident.

According to the political secretary of Matagalpa, Pedro Haslam, about 50 people were traveling in the vehicle.

The truck with license plates MT 446 license plate, is owned by Alex Molina Argüello. The driver of the vehicle, according to the mayor of Waslala, Germán Vargas, turned himself in to the Police of that municipality.

Waslala was one of the worst hit sectors after Hurricane Iota in Nicaragua.

With reports from La Prensa, El19Digital

- Advertisement -
Paying the bills
Previous articleItaly to start distributing Covid-19 vaccine at the end of January
Next articleOn the Back of the Pandemic, the Militarization of Latin America is Gathering Momentum, Analysts Warn