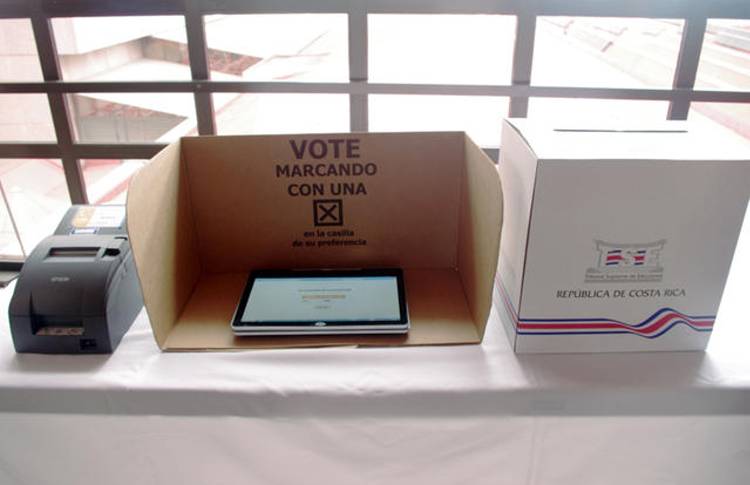 Every four years Costa Rica holds generals elections, where every Costa Rican over the age of 18 can vote to elect on national level a head of state – the president – and a legislature.

The Tribunal Supremo de Elecciones (TSE) is the supreme power during the election process, enforcing rules to ensure valid voting, and how votes are counted and aggregated to yield a final result.

The TSE reports that in 2010 elections, that saw Laura Chinchilla Miranda elected president, a total of 30.88% of Costa Ricans stayed home.

For example, the TSE report 56 Costa Ricans living in Australia, 19 in Qatar, 4 in Trinidad & Tobago, 31 in Cuba, 71 in China, 484 in Canada and 8.316 in the United States, the majority in New York, among the many places. The TSE said it will cost US$260.000 dollars to allow Tico expats to vote in their countries of residence. A complete list of voters by province, canton and voters living outside of Costa Rica can be found here http://www.tse.go.cr/pdf/padron/sumaria_pcd.pdf

In Costa Rica “majority” rules. Those who are unfamiliar with Costa Rica’s voting theory are often surprised that they must first understand the definition of what majority means.

Costa Rica’s constitution requires that a candidate is declared a winner if he or she (no shes for 2014) must with more than 40% of the vote. If no candidate gets more than 40 percent of the vote on Feb. 2, the top two finishers will face a runoff in April.

Costa Rica has not had a runoff election since 2002, when Abel Pacheco received 38.6% of the vote, beating Rolando Araya (brother of current presidential candidate, Johnny Araya, nephews of former president Luis Alberto Monge), with a 58% in the second round.

The two round system is used around the world for the election of legislative bodies and directly elected presidents. For example, it is used in French presidential, legislative, and cantonal elections, and also to elect the presidents of Afghanistan, Argentina, Austria, Brazil, Bulgaria, Chile, Colombia, Costa Rica, Croatia, Cyprus, Dominican Republic, Ecuador, Egypt, Finland, France, Ghana, Guatemala, India, Indonesia, Liberia, Peru, Poland, Portugal, Romania, Senegal, Serbia, Slovakia, Slovenia, Timor-Leste, Ukraine, Uruguay, Zimbabwe —see: Table of voting systems by nation. Historically it was used in the German Empire of 1871-1918, and in New Zealand in the 1908 and 1911 elections.

- Advertisement -
Paying the bills
Previous articlePawnshops Do Brisk Business In Cash-Strapped Costa Rica After Christmas
Next article335 And Counting, The Number of Fines For Not Having Marchamo