3 Months To Fix The Stadium Roof! 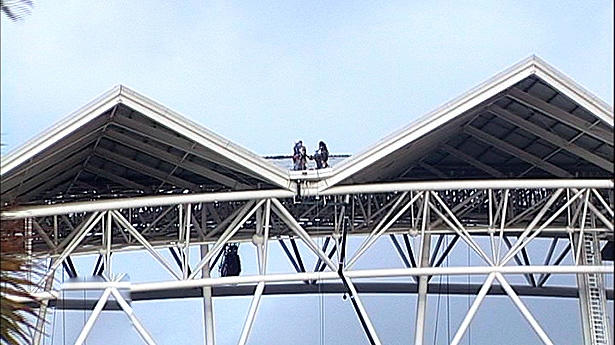 The Municipalidad de San José on Tuesday began the clean up of the area of the National Stadium roof damaged during the fireworks display Sunday night.

A section of the roof of the western sector of the stadium caught fire during the opening of the uegos Deportivos Centroamericanos 2013 (2013 Central American Games).

According to municipal officials, the temporary fix will be done before the end of the month, but it will be three months before the permanent repairs will be completed.

The delay is due to the lack of material and money to buy the original plates in which the muni will be seeking a donation from the central goverment.

Municipal officials assure that the entire process will be documented and the costs will be covered by the insurance policy of the company hired for the fireworks display.

QCOSTARICA - The disappearance of the taximeters (popularly known as "marías") will not be immediate despite the new mobile application that will manage services...
Pura Vida

QCOSTARICA - Dona Rosa lost everything in her life and surrendered her will to the hands of others. Luck changed one day when she...
Politics

QCOSTARICA - In order to reactive national tourism, the Government of Carlos Alvarado will present a bill so that, for a single time, Father's...
Economy

QCOSTARICA - If there were doubts about the impact of COVID-19 on the Costa Rican tourism sector, the figures will help to clear them...
Consumption

QCOSTARICA - The coverage of fiber optic networks used to bring broadband Internet to Costa Rican homes and businesses increased 146% in one year,...
Vaccine

QCOSTARICA - A new batch of vaccines of 92,430 doses, and the largest received since December against covid-19, arrived Tuesday, as part of the...
Coronavirus

The number of reported global weekly COVID cases is falling and has dropped nearly 50% this year, the World Health Organization (WHO) said overnight....
Redaqted