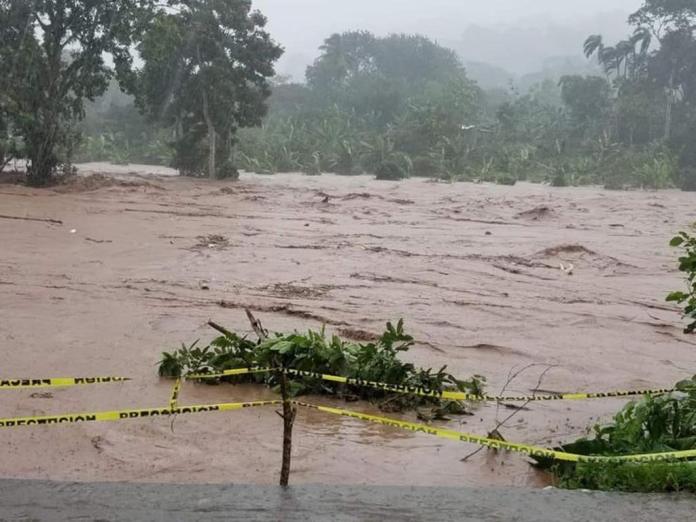 TODAY NICARAGUA – The damage from Hurricane Iota in Nicaragua is beginning to be quantified: at least four dead and 48,000 evacuated. The first fatalities were two brothers, minors, who were dragged by the current of a river in Carazo.

According to the official statement, a brother and sister, ages 11 and 8, drowned in the community of La Pinuela trying to cross the swollen Solera River.

The other two victims are father and son and died after a landslide occurred in the El Jilguero community, in Wiwilí.

The evacuees are located in the more than 500 shelters in the country.

In her noon speech, vice-president Rosario Murillo said that in Rivas there are a thousand families in shelters in the Tola area. She also said that 33,000 responders are attending the emergency.

National authorities maintain a red alert on the Caribbean Coast of Nicaragua, where Hurricane Iota entered last night, and a yellow alert on the rest of the national territory.

According to the Humboldt Center, the rains will persist at least until tomorrow, Wednesday, November 18, and called to be aware of the rising of the rivers and flood conditions.

A day earlier, Iota intensified into a Category 5 storm, but it weakened as it neared land and made landfall with maximum sustained winds of 250 km/h. The system came ashore about 45 kilometers south of the Nicaraguan city of Puerto Cabezas, also known as Bilwi. That was just 25 kilometers south of where Hurricane Eta made landfall on November 3, also as a Category 4.

By midday Tuesday, Iota had diminished to a tropical storm and was moving inland over northern Nicaragua. It had maximum sustained winds of 120 km/h and was spinning westward at about 20 km/h.

The storm is forecast to cross into southern Honduras Tuesday night.

Although only a couple of scenes were filmed in Costa Rica, the movie ‘Runner runner’ generated employment for several Ticos. Archive

Mirna Wood, vice president of the Miskito ethnic group in Honduras’ far east Gracias a Dios region, was in Tegucigalpa collecting donations for her community ravaged by Eta when Iota hit.

‘We will never forget this year’

Eta triggered flash floods and mudslides in parts of Central America and Mexico and killed more than 130 people.

“We will never forget this year,” Bermudez said.

Even before Iota hit Nicaragua, it scraped over the tiny Colombian island of Providencia, more than 250 kilometres off Nicaragua’s coast. Colombian President Ivan Duque said one person was killed and 98% of the island’s infrastructure was “affected.”

Providencia,part of the Colombian department of Archipelago of San Andrés, Providencia and Santa Catalina and the municipality of Providencia and Santa Catalina Islands off the coast of Nicaragua, is inhabited almost exclusively by the descendants of African slaves and British colonizers, who speak an English version of Creole as their native language. The island has no direct flights to the continent, but it has become an increasingly popular tourist destination thanks to its quiet beaches and rich marine life. On Tuesday, Colombian officials said they were sending a ship with 13 tons of aid to the island.

Iota is the record 30th named storm of this year’s historically busy Atlantic hurricane season. It’s also the ninth storm to rapidly intensify this season, a dangerous phenomenon that is happening more often. Such activity has focused attention on climate change, which scientists say is causing wetter, stronger and more destructive storms.

The official end of the hurricane season is Nov. 30.

QCOSTARICA - Respectful of the government's decision to eliminate...
El Salvador