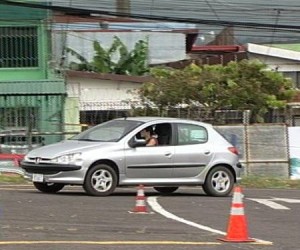 Every month some 10.000 people begin the process of obtaining their drivers license, which includes a written exam and a road test.

According to the Consejo de Seguridad Vial (Cosevi), 55% of the potential drivers fail their road test, this due to a curve that has to driven in reverse. The other reason many fail the road test is as simple as not obeying the road signs.

As to the written exam, the Cosevi figures indicate that a 45% failure rate.

Failing a test is not only expensive but time consuming. To retake the test – written or road – there is a two week waiting period before, and of course the full test fee is payable again.

TODAY NICARAGUA – In an unprecedented persecution, the Daniel Ortega regime detained four presidential candidates in one week, a move that is part of...
Nicaragua

QCOSTARICA - For years, Tilarán has seen the transit of tourists heading towards Lake Arenal, the homonymous volcano and La Fortuna or towards Monteverde. At...
News