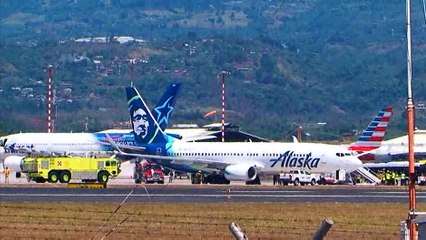 An Alaska Airlines plane had to make an emergency landing at Juna Santamaría Airport (SJO), shortly after taking off at 11:06 am, declaring an alert in flight. 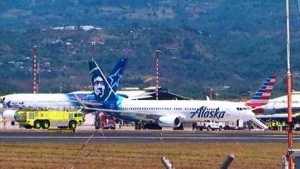 The plane, with 142 aboard heading for Los Angeles, was forced to return to Alajuela with engine problems, forcing the authorities to dispatch a large number of first responders – Bombers (Fire Department) Cruz Roja (Red Cross), Transito and airport security.

Apparently, a bird strike had occurred in one of its engines. The plane landed safely and without incident, passengers were taken to a special area and were finally able to leave Costa Rica on another plane.

According to Aeris, the airport manager, the incident caused delays in 7 other flights – 5 arriving and 2 departing.

This is the fifth air emergency that has occurred in recent days, the most recent being last weekend, with an American Airlines plane.

Civil Aviation explains that it maintains a crew at the country’s international airports – San Jose, Liberia (LIR) and Pavas – to keep birds from interfering with flight operations. A spokesperson for Aviacion Civil stressed that the birds are not endangered in any way in their measures to stay them clear of the airports.

- Advertisement -
Paying the bills
Previous articleUnacceptable to intervene journalist’s telehones in order to know their sources
Next articleIn the MOOD Live from The BPM Festival, Costa Rica Part 2 (Podcast)

QCOSTARICA - Once more a group of taxi drivers...
National