A Cowboy Who Hasn’t Lost His Style 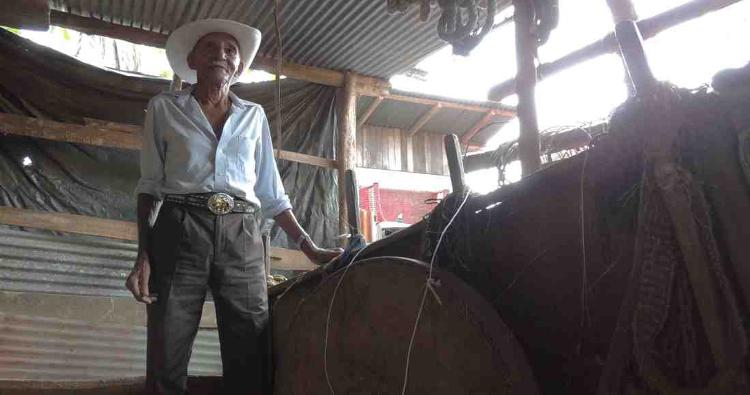 By: Oliver Perez for El Sabanero/ Vozdeguanacaste – Gonzalo Pizarro Barrantes is one of the few Santa Cruz cowboys who still lives in the fields. Although he doesn’t work on a ranch, he is used to riding a horse at 84 years old.

On a daily basis, it’s common to see him riding his horse in the middle of the city, shopping or having a drink at one of the popular bars in the area. For many years, before the folkloric city was full of cement, when there were pastures in every direction, locals used horses as a means of transportation.

In his house, in the Santa Cecilia neighborhood, he lives with his wife Luz Cisneros, to whom he’s been married for some 60 years, according to his memory. There in his yard he has his own stable. On January 7 the local newspaper El Sabanero visited him, and he was caring for his two horses: Enamorado and El Bailarin (In Love and The Dancer).

“Don Gonzalo,” as he’s called by those who know him, has packs, tack, a cart, and a traditional stove, among other things that were used many years go and which he still can’t leave behind.

The long-lived man is five foot ten, lives like a machine, hears perfectly and dresses with a cowboy style.

“I live happily; I believe that’s part of the secret of long life, along with good health. Here in my home I live a calm life, caring for my horses. I feel good riding horses and making trips through the city and joking with people,” he said joyfully.

To sit with “Don Gonzalo” for a few minutes is to have an enjoyable time, as he makes one smile with the stories he tells and his excursions. He is currently preparing to ride in the horse parade on January 18 in the traditional fiestas of Santa Cruz.