The party is expected to start at the San José international airport, where the members of La Selección will arrive on Tico soil for the first time since the middle of June.

The flight from Brazil is expected to arrive at 12:30pm.

At the present time the flight is delayed, expected to arrive at 2:20pm. See Avianca website for current flight status.

A countless number of people are expected to be on hand at the airport to greet the underdogs that surprised everyone at the World Cup 2014 games.  Even more are expected to line the autopista General Cañas, to personally greet the caravan that will take the Los Ticos, the coaches and their families to La Sabana part, where the real party will be.

The caravan is expected to arrive at La Sabana by 3:00pm.

The esplanade in front of the León Cortés statue of La Sabana park will be the epicentre of the celebration. Paseo Colón and the surrounding streets are expected to be jammed with fans.

Organizers say fans can expect some of the players to address the them directly, with sound amplification to deliver the message over a good part of Paseo Colón, and even may walk among the fans.

Today is an important day in the history of Costa Rica’s football. 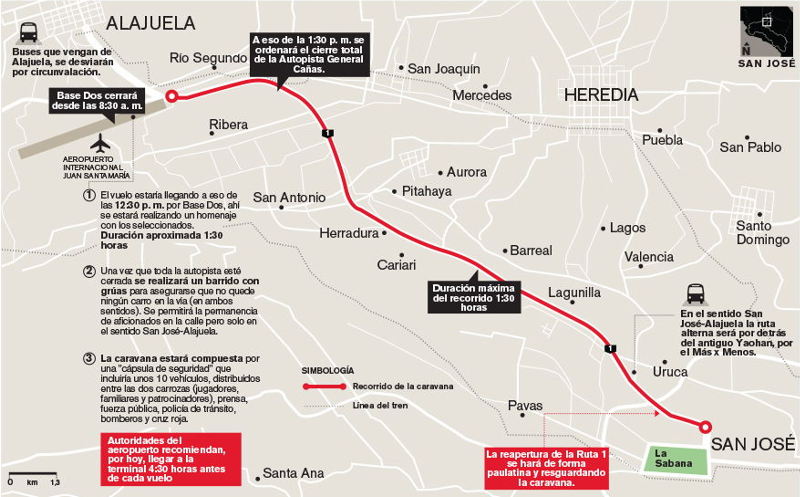 Editor’s note: If you are not a fan of football, it is best avoid the areas of La Sabana and Paseo Colon this afternoon.

QCOSTARICA - The judicial file of the Cochinilla Case, on alleged corruption in road works, exposes how three companies would have covered up the...
Business

Today, Wednesday, June 16, vehicles with plates ending 5 & 6 CANNOT circulate The measure is countrywide and applied between 5:00 am and 9:00 pm,...
Turrialba