Shoppers of the Auto Mercado in Los Yoses will notice two novelties: the first, the supermarket chain has stopped offering plastic bags and second, a neighborhood garden. 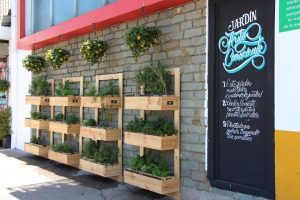 The supermarket stopped offering plastic bags to customers on February 15, part of a campaign to discourage the use of single-use plastic bags and motivate customers to carry their own bags or use one of the cardboard boxes offered by the store to carry home their purchases.

For some time cashiers at all 21 Auto Mercados have been offering their customers a choice of plastic bag or box. For ¢1,145 colones the supermarket offers a reusable plastic bag.

“We do not earn anything from those bags, we sell them at cost,” said Silvia Pérez, Coordinator of Social Responsibility of Auto Mercado.

The choice of the Los Yoses store as the first to go ‘bagless’ is not a coincidence. The Los Yoses is the first Auto Mercado, opening its doors back in 1960.

“The Los Yoses Auto Mercado is the first, so we thought it was very important to start there where everything started,” Pérez said.

According to Pérez the Escazu store will be next to go bagless, and they will monitor the evolution of the process to determine when they would replicate the plan in the rest of their stores and the respective order.

(QCOSTARICA) AutoMercado confirmed on Tuesday about a positive case of COVID-19...
Read more

QCOSTARICA - Faced with wasting a vaccine dose when people in the priority groups scheduled do not show up, and a substitute cannot be...
Entertainment

Q24N - El Salvador may be the first country to adopt bitcoin as legal tender, but recent developments suggest that it might not be...
Disasters