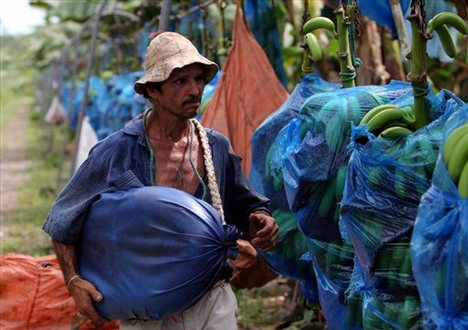 Q24N – Lawsuits filed by Latin American banana plantation workers have been upheld despite being dismissed by a number of other courts. The workers claim that they were exposed to harmful chemicals while working on the plantations.

The lawsuits, which were filed by hundreds of plantation workers, target major corporations like Chiquita, Dow Chemicals and Dole Foods. The farmers allege that they were exposed to dibromochloropropane (DBCP) on the job and were not given any protection. DBCP is banned in the United States for causing cancer and sterility.

A report from the Louisiana Record details the allegations:

Because of the exposure to DBCP, the banana farmers are claiming that they have suffered from infertility, cancer and problems with their renal systems and sperm.

A case recently dismissed by a Delaware court was revived by the U.S. Court of Appeals for the Third Circuit in an 11-0 decision. This specific battle is just a small part of a much wider struggle that has been going on since the late 70s.

Most domestic uses of DBCP were banned in 1977 but, despite strong warnings about its health impact, Dole continued to use the chemical. It even threatened to sue Dow Chemical if they stopped sending shipments of the DBCP to their banana plantations in Latin America. In 1983, six of the Occidental plant workers won a $4.9 million judgement against Dow, which paved the way for the EPA to ban all uses of the substance in the United States.

After a Texas court ruled that foreign locations could become part of such lawsuits in 1990, 1,000 Costa Rican plantation workers filed suit against Standard Fruit, which is now Dole. The corporation agreed to pay $20 million, but after legal fees the workers weren’t left with much money. Small payments were also ultimately received after a class action lawsuit in 1993 that filed by over 16,000 plantation workers against several fruit and chemical companies, including Dole, Chiquita, Del Monte.

The Nicaraguan Nemagon movement, which sought justice for the impacted workers, began in the early 90s and targeted the fruit and chemical companies. In 2002, after a legal battle led by the attorneys who worked on Erin Brockovich landmark toxicity suit, Nicaragua’s Supreme Court ordered Dow Chemical Co., Shell Chemical Co. and Dole Food Co. pay nearly $500 million in compensation to 583 Nicaraguan banana workers. Not only did the companies refuse to participate in the trial, Dow called the judgment “unenforceable” because the trial didn’t take place in a US court. They also pointed at the previous claim of law 364 being unconstitutional. One year later, a Los Angeles judge ruled that the decision couldn’t be enforced because the companies weren’t legally notified.

In 2009, Fredrik Gertten directed a documentary on the legal fight between Dole and Nicaraguan banana plantation workers called Bananas!

Walmart Exploiting Our Love of Bananas

Vice.com's Munchies reports that at Walmart, it's all about the banana....
Read more

Whether you struggle to learn in a traditional educational...
Alajuela