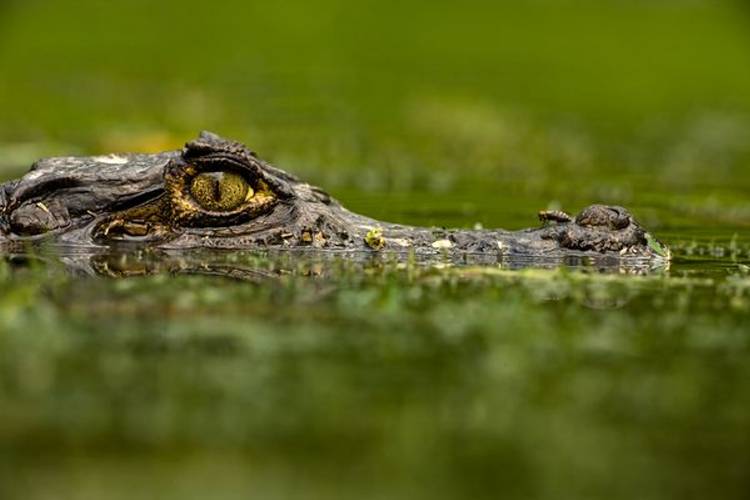 For more than a week, news media outlets in Costa Rica and around the world have been publishing articles with eye-grabbing headlines that allude to the worldwide popularity of bananas (Musa acuminata et al) as being responsible for the demise of the Caiman crocodilus in our Caribbean coast.

Clever headlines such as “Yellow Peril,” “Crocs Going Bananas,” “Love For Bananas is Killing Caimans in Costa Rica” accentuate a problem that is not being interpreted correctly.

More than two dozen news outlets and science blogs have reported on a single press release about a research study published in the Environmental Toxicology and Chemistry journal. Even the Costa Rica Star jumped on the bandwagon of a story too interesting to resist. The basics of the story are well posited by the respected National Geographic News:

Costa Rica is a prime location for banana production. As a key export, bananas play an important role in the nation’s economy. In 2011, Costa Rica exported 2 million tons (1.9 million metric tons) of bananas, valued at over $700 million.

As demand for the fruit increases, so does pesticide use. In the last two decades, pesticide use in Central America has doubled. Costa Rica ranks second in the world for intensity of pesticide use […]

spectacled caimans (Caiman crocodilus) near banana plantations were significantly thinner, and had higher pesticide concentrations in their blood, than caimans in more remote locations.

In Costa Rica, one of the leading environmentalist news publications, El Pais, reported as follows:

Plague control methods used in banana plantations of Costa Rica are poisoning caimans; even those in protected areas (such as Tortuguero National Park) […]

According to El Pais, some of the contaminants found in caimans’ blood include DDT, which has been prohibited for decades but traces remain in the habitat and make their way into caimans’ tissues and organs, thereby making them sick. Then, El Pais goes on to put numbers to the sizable exports of bananas -about 107 million boxes, almost half of them sold to the people of the United States, who simply cannot get enough of this delicious and nutritious fruit.

A Sharp Journalist Looks at the Issue

Naturally, El Pais and other publications invite to point fingers at the irresponsible use of pesticides and unsustainable farming techniques. There is a problem with this uncritical reporting of science news. Enter Anne Vezina, a prominent science blogger at ProMusa, a site that chooses the tagline: “Mobilizing banana science for sustainable livelihoods.” Ms. Vezina explains what called her attention to the media blitz of bananas vs. caimans:

The first thing that caught my attention was the type of pesticides detected in the caimans: 7 organochlorine insecticides and 2 pyrethroid insecticides. Organochlorines are pesticides like DDT, banned chemicals that are known to persist in the environment and accumulate in the food chain. I had never come across them in relation to bananas, except for chlordecone, but it was not one of the 7. Moreover, while it’s true that the banana industry in Costa Rica is a heavy consumer of pesticides, the intensive spraying regimen for which it is known uses fungicides, not insecticides,

Ms. Vezina actually consulted the research paper, asked questions of the research authors and even went as far as to contact representatives from Dole and Chiquita in Costa Rica. Essentially, Ms. Vezina is using science and investigative journalism techniques that we should all be thankful for. It turns out that none of the pesticides mentioned in the study were used by Costa Rica’s banana industry back in 2006, when the caimans were sampled.

Another slight red flag raised by the study and the ensuing media coverage thereof was the focus of the researchers on bananas. Ms. Vezina found that it was the researchers’ understanding that agriculture in Tortuguero is limited to the banana cash crop; she knows this is not true, and any Tico or visitor to the area knows this as well. Cultivation of other crops, both organic and massively farmed, takes place in the area, and some farmers might use pesticides and fungicides.

What follows is the most important portion of Ms. Vezina’s findings:

I am aware that by speaking out against this study I risk coming across as an apologist for monocultures and heavy pesticide use. I am not. I did this post mainly to underscore the importance of basing recommendations on solid scientific evidence.

That is not to say that there is nothing the banana industry can do to reduce pesticides in plantations.

[…] there could be a way to grow pesticide-free bananas for export in the humid tropics, except that most consumers don’t want to hear about it. But that’s another post.

We hope that Ms. Vezina and other sharp observers and journalists decide to take a critical look at such issues in the future. Their work is refreshing in this era of catchy headlines and uncritical reporting.