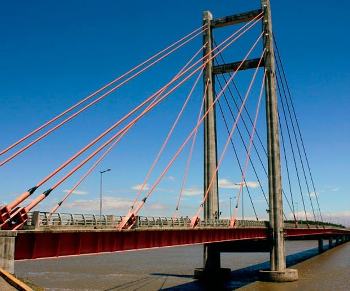 The Puente La Amistad de Taiwán (English: “Taiwan Friendship Bridge”) in Guanacaste could soon be a toll bridge, if a proposal by legislator Ernesto Chavarria is approved by the Legislative Assembly.

The plan is to charge ¢500 colones for passenger vehicles, ¢150 for motorcycles and more for heavy vehicles.

The legislator says the proposal is to raise fund to maintain the bridge, a bridge that is showing signs of serious deterioration for lack of maintenance, damage by the September 5, 2012 earthquake and vandalism.

According to Chavarria, the proposal is expected to go before the Comisión de Asuntos Hacendarios en la Asamblea Legislativa  (Financial Affairs Legislative Committee), responsible for analyzing the bill, within a month.

Although the proposal is entering the legislative process, area residents and users of the bridge flatly reject having to pay a toll to cross the bridge.

The Puente La Amistad de Taiwán  spans the Tempisque River, in Guanacaste, northern Costa Rica. Although generally known as a cable-stayed bridge, it is really a hybrid bridge composed of a cable-stayed span and a pillar-supported bridge.

The bridge was financed and designed by Taiwan and built primarily by the Taiwanese company MAA, with participation of Costa Rican engineers and workers. It has a particular importance for the province of Guanacaste for it facilitates transit from the capital city of San José. Prior to the construction of the bridge, this route required the use ferries to cross the Tempisque River, or long alternate land routes.

Recent Costa Rican studies have found some problems in the structure that have required increased maintenance.

The bridge has been known colloquially as Puente de la Apuñalada (Back stab Bridge) since former Costa Rican President Óscar Arias cut off relations with Taiwan in favour of China.

- Advertisement -
Paying the bills
Previous articleChinchilla: “They Won’t Enter Guanacaste”
Next article227 Murders So Far This Year And Counting…