Border Humour: Presidents of Nicaragua and Costa Rica Battle It Out! 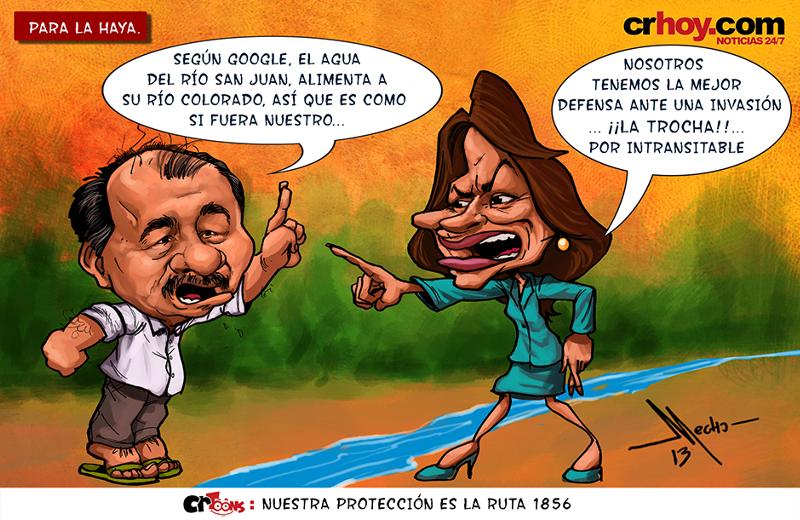 In this caricature by CRHOY, we have Nicaraguan president, Daniel Ortega (left) telling Costa Rican president, Laura Chinchilla, “According to Google, the waters of the San Juan river feed the the Colorado river, so it’s like (the Colorado) is ours”.

Chinchilla responds, “we have the best defense against an invasion…La Trocha!!… for being impassable”.

This past week, Nicaragua is asking the International Court of Justice (ICJ) at The Hague to give Nicaragua navigation rights of the Colorado river that belongs to Costa Rica. The two countries are locked into a border battle dispute following the alleged invasion of Nicaragua of the Isla Calero (in October 2010) along the San Juan river that belongs to Nicaragua.

That case is before the ICJ.

QCOSTARICA - Public worker unions from the Education, Health, Judiciary, Transport, and public universities, among others, will join forces this Friday, March 5, in...
Fashion & Beauty

Q MAGAZINE - Miss Costa Rica 2020, Ivonne Cerdas, will soon be traveling to Florida to represent the country in the Miss Universe pageant. After...
Greater Metropolitan Area

QCOSTARICA - The images filled the morning news television screen, for no apparent reason, the driver of a big rig begins to beat with...
Banking

QCOSTARICA - Loans in dollars, which had a great boom in 2000, began to slow down since 2016 and today, despite the fact that...
Immigration

QCOSTARICA - Before I get into my opinion of the irresponsible actions of the immigration service and the ICT, good news for tourists who...
The Americas

Q REPORTS - Former US President Donald Trump's policy of maximum pressure on the Venezuelan dictatorship failed to dislodge the regime or alleviate the...
Immigration

UPDATED: The DGME confirmed that anyone entering the country on or after December 17, 2019, will be allowed to legally stay until June 1st,...
Health

QCOSTARICA - The Ministry of Public Security (MSP) reported on Friday that, in a period of two weeks, 47 travelers have tried to leave...