Caravan With Ashes of Fidel Castro Headed for Santiago 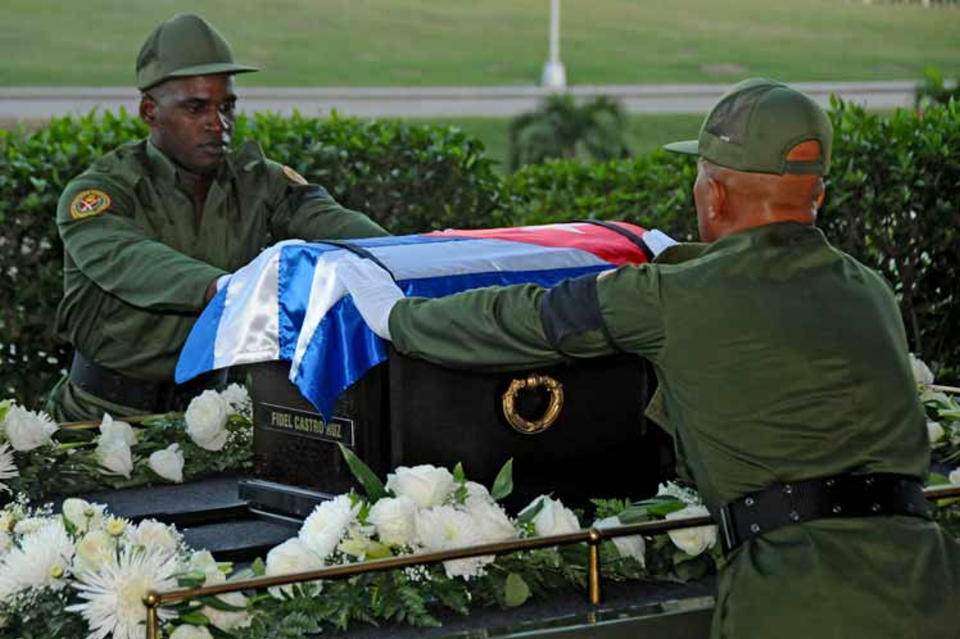 TODAY CUBA NEWS -(Prensa Latina) The Caravan of Liberty, with the ashes of the historic leader of the Cuban Revolution, Fidel Castro, left today (Wednesday) for the Santa Ifigenia cemetery in Santiago de Cuba, as close as possible to his original route in January Of 1959.

The funeral procession covered several streets in Havana, where the capital city gave the last goodbye to Fidel Castro, whom many consider the most renowned statesman in the twentieth century.

The Caravan of Freedom plans to arrive in Santiago de Cuba on December 3, after passing through most of the provinces of the country.

Originally, the caravan left in the early hours of January 2, 1959 from Santiago led by Fidel Castro and combatants of the Rebel Army. He arrived in Havana six days later, on the 8th, amidst great popular euphoria after the overthrow of dictator Fulgencio Batista.

Yesterday night, in the capital’s Plaza de la Revolución (Revolution Square), dignitaries from around the world expressed their condolences for the death of Fidel Castro.

Accompanied by cheers of ‘I am Fidel’, the leaders and international personalities attended the multitudinous act in tribute to the Commander-in-Chief.

In closing the posthumous tribute, President Raúl Castro reaffirmed the will of the people of the island to continue the ideas and the work of Fidel, who was described by several personalities as the father of the excluded and the marginalized.

In addition, he recalled the leader’s commitment to solidarity and thanked for the affection, respect and affection of the heads of state and government, international personalities and the Cuban people.

Previously, Venezuelan President Nicolás Maduro highlighted the imprint of Fidel, who said that changed the course of the history of Cuba, the Patria Grande and humanity.

What is happening today in the Plaza de la Revolucion, so full of historical energy, is the best way to tell Fidel Hasta siempre! (Until always), and so have men and women from the five continents gathered here, he stressed.

Maduro described him as a man of incredible courage, of brave courage, a leader of his time, his work is a beacon that guides the people, he reiterated.

Cuba has already marked its destiny, its historical trajectory will be renewed with new strength and with the revolutionary and socialist force of a people who has learned to make their own history, he said.

Meanwhile, Ecuador’s head of state, Rafael Correa, highlighted the commitment of life assumed by the historic leader of the Cuban Revolution to the noblest causes of Latin America, the Caribbean and the world.

He remarked that the iconic Cuban revolutionary died undefeated; Only defeated by the inexorable passage of the years. He died honoring his name, Fidel: worthy of faith, a faith that was never disappointed and even less betrayed, said Correa.

Other dignitaries like Daniel Ortega, from Nicaragua; Salvador Sánchez Ceren, from El Salvador; and Evo Morales, from Bolivia, also paid their respects to the leader of the Cuban Revolution.

QCOSTARICA - The traditional discounts or "ofertas" in Spanish, ...
Health