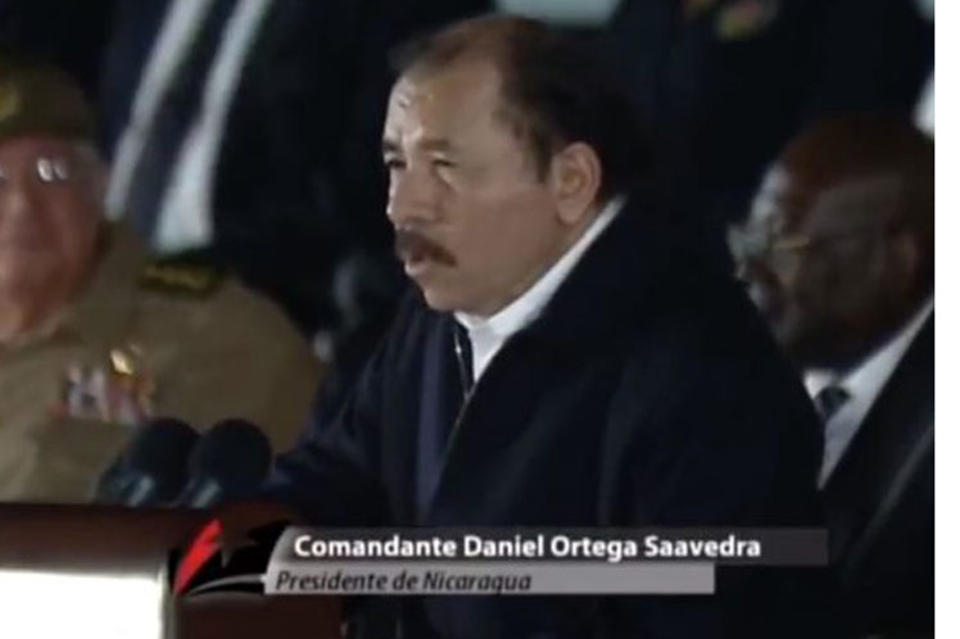 TODAY NICARAGUA NEWS – In an unscripted and with the aid of Raul for the exact dates, Nicaragua President Daniel Ortega gave an emotional speech at the memorial service for Fidel Castro in La Havana on Tuesday night.

In perhaps the longest time at the microphone than anyone else, more than 20 minutes –  prompting Raul, when he took to speak just after Venezuela’s Nicolas Maduro, assured the people that he was the last one – Ortega’s words were not delivered from a written page, but from the heart as he related his experiences with both Fidel and Raul, in Cuba as in his home country.

“Fidel Castro produced the miracle of the first socialist Revolution of Our America and at barely 90 miles from the United States,” recalled Daniel Ortega, as he spoke about the struggle against “imperialism and the imperialist regime”, the United States.

Ortega described as “a crime of lesser humanity the economic, financial and commercial blockade imposed by the U.S. on Cuba for over half a century, which ‘should be judged by the famous International Penal Court.

“Fidel defended the right of Cuba to develop. Amidst the law of the jungle of capitalism, he promoted those principles that (Karl) Marx, with deep humanistic spirit proposed to achieve that paradise be built on Earth,” said Ortega.

During the political-cultural ceremony in posthumous tribute to Fidel, Ortega made a call to the Latin American and Caribbean unity to save the sovereignty of people, the advances in all fields, “we are living a new era in our America”, he stressed.

Ortega lamented the passing of Fidel. “It hurts that transit to immortality,” he said. He recalled also that Fidel and Hugo Chavez were pioneers of the Bolivarian Alliance for the Peoples of Our America, PetroCaribe and the operation Miracle, among other mechanisms that helped consolidate the unity among the Latin American and Caribbean countries.

Ortega took the opportunity to praise the values, the ethics and morale of Fidel and also appreciate the solidarity and the altruism of the Cuban people toward Nicaragua and all the peoples in the planet, including that of the United States.

“Fidel backed the just and noble causes. He supported Salvador Allende, Chavez and Nicaragua when they needed it the most,” said Ortega.

QCOSTARICA - The general elections in Costa Rica to...
Business