Colombia Has a New Peace Deal, But Challenges Remain 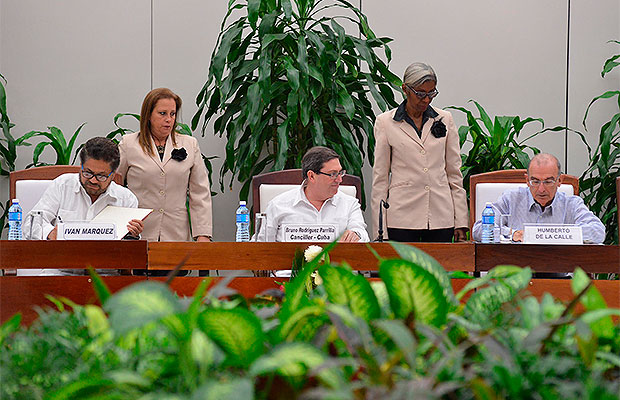 TODAY COLOMBIA NEWS – Insightcrime.org – Forty days after Colombia rejected a peace agreement between the government and FARC rebels, a second deal has been signed with 56 amendments, getting the peace process back on track. Nevertheless, huge challenges remain.

The new agreement was signed on November 12 in Havana, Cuba, the venue for more than four years of difficult negotiations between the government of President Juan Manuel Santos and senior commanders of the Revolutionary Armed Forces of Colombia (Fuerzas Armadas Revolucionarias de Colombia – FARC).

Studying the new peace deal, it looks very much like the one signed on September 26 to international fanfare. There appear to have been some small adjustments to address the concerns of the opposition, led by former president and now senator, Álvaro Uribe. The opposition politicians were not invited to attend the talks that modified the agreement and indeed were not even given a preview of the new 310-page document before it was signed. (For the complete document see this pdf)

Here is a breakdown of the major issues and amendments:

1. The controversial Special Jurisdiction for Peace (Jurisdicción Especial para la Paz), the legal framework for the agreement and the central pillar of the deal, remains in place despite opposition requests that this be scrapped. This Special Jurisdiction ensures that no rebel, even those guilty of crimes against humanity, will be condemned to more than eight years as long as they fully cooperate with investigations. Under the September agreement, this sentence was to be under the conditions of “restricted liberty,” which was left largely undefined. The opposition wanted this to potentially include prison time or at least confinement in penal farms. The new agreement states that the convicted rebels will be restricted to a very limited geographic area but will live in a residence during the entirety of their sentence, so long as they are involved in consolidating peace. There was one concession made, namely that rulings by the Special Jurisdiction could be challenged and the Constitutional Court would have the final say.

2. Holding of political office. The opposition to the agreement charged that no rebels guilty of crimes against humanity — which is almost the entire FARC high command — should be allowed to hold political office.

“Nothing can justify the election of Timochenko [the alias of the FARC commander-in-chief Rodrigo Londoño Echeverri] to the Senate or the Presidency, or Joaquín Gómez [the alias of another top FARC commander, Milton de Jesús Toncel Redondo] as governor of La Guajira” said Uribe.

“I understand this is the feeling of many citizens,” replied President Santos. But he said that “the reason for all peace processes in the world is precisely that guerrillas leave aside their weapons and engage in legal politics.”

So all FARC commanders remain eligible for political office and will be able to take up the 10 guaranteed seats in Congress (five in the House of Representatives and five in the Senate) for two four-year terms, as set out in the original agreement.

3. FARC money and drug trafficking. Virtually nobody believes the rebel claims that they are broke. The FARC became aware that this was generating problems for them, and two days before the October 2 plebiscite they said they would look at delivering some assets to compensate victims. It was far too little, far too late, and this was a major contributor to the successful “No” vote. Under the terms of the new deal, the FARC have now promised to draw up a list of all their assets to hand over as part of reparations for victims.

After more than three decades profiting from the cocaine trade, the issue of drug trafficking was at the heart of opposition complaints. Under the September agreement, drug trafficking by rebels was made a political crime, as earnings went to fund the revolution. This remains the case, although the new agreement stipulates that each drug trafficking case will be reviewed separately to ensure that funds went to the revolutionary cause, not personal enrichment. If any personal enrichment is found, that case comes under normal criminal jurisdiction. Those involved in drug trafficking activity also have to give up all routes, contacts and the inner workings of the trade to qualify for amnesty.

4. Incorporating the agreement in the Constitution. This was one serious concession to the “No” camp. Under the September deal, the entire 297-page agreement was to be added to the Constitution. The guerrillas insisted on this, fearing that the next president could come from political elements opposed to the deal and move the goalposts. Under the new deal, only the sections of the agreement that deal with human rights and international humanitarian law will be added to the Constitution. It seems the guerrillas are happy that international involvement and the judicial guarantees in place will protect them in the future.

While it seems the government and the FARC have given little to the “No” camp, this does not portend smooth sailing for the peace process. We are still waiting for the reaction from the opposition, which could claim the wishes of the majority of voters in the plebiscite have not been respected. Former President Uribe has said that he and his team still have to read and digest the document, but told Santos that this “should be not definitive” as the final agreement until they have had a chance to comment.

The other issue is whether Santos will allow the Colombian public to vote again on the agreement. He might well lose a second vote. Most likely he will simply present the signed agreement to Congress, where he has a majority, to vote on the deal. Once it has got through Congress it has to go to the Constitutional Court for final ratification before it becomes law. If Santos had won the plebiscite, the agreement would have gone through Congress very quickly with “fast track” status, where legislators would have had a simple yes or no vote and no power to change the agreement. Unless Santos calls another plebiscite and wins it, he might not have his fast track option, in which case the new agreement would have to go through Congress at the normal speed and be open to debate and perhaps amendment. While this could be done in four to six months, opposition elements might deliberately slow up the process. Then the agreement could become part of the 2018 election campaign, which might further delay its implementation.

However it is not just Santos who has serious challenges ahead. Timochenko is also trying to hold his rebel army together. InSight Crime attended the FARC’s 10th Conference in September, when rebel representatives from across the country came together to debate and approve the initial agreement. While the agreement was approved, several middle-ranking rebel commanders expressed great concern about its contents. One rebel unit, the FARC’s First Front in Guaviare, has already broken away, stating it will not respect the agreement and will stay in the revolutionary struggle. InSight Crime, after more than 18 months of field research across the country, believes that the First Front is not the only rebel unit to be profoundly unhappy with the peace deal.

After the October plebiscite, Santos stated the bilateral ceasefire would only be extended to the end of the month. Rebel sources consulted by InSight Crime said that this caused panic among rebel units. Many had left their strongholds, moving along corridors “opened” for them by the military towards the concentration zones agreed in the peace deal, or to attend the 10th Conference. Many had travelled for weeks. So giving the FARC just over three weeks meant that many guerrilla units panicked and started moving straight back to take up war positions. Santos realized his mistake and extended the ceasefire until the end of the year. But the damage had already been done, and many guerrillas feared that the military was preparing to launch an offensive, as happened after peace processes in 1990 and 2002 failed. The fragile trust that certain guerrilla factions have in the government was severely eroded.

“The ceasefire is fragile,” Santos admitted. “The uncertainty generates fears and increases the risks to throw this immense effort overboard.”

The new agreements on drug trafficking might also push certain guerrilla commanders deeply involved in the cocaine and marijuana trade out of the process. While drug trafficking remains a political crime under the new agreement, now any FARC members involved in the trade will go under the microscope and will have to give up all their associates, in many cases family members not part of the guerrilla army. This could be seen as far too great a risk by certain rebel leaders, many of whom are loathe to give up the immense earnings drugs generate for them.

While in the field interviewing FARC members, InSight Crime also found that the guerrillas may well have a Plan B in case the agreement collapses or the government fails to fulfill the terms of the deal. Some 1,500 of the most dedicated and veteran guerrillas may not surrender, but remain in the field, hidden or across the border in neighboring Venezuela, which is facing its own problems. A quantity of weapons will also not be handed over to the United Nations. We heard several different rumors of this plan, but there was a common thread, and that was the Teofilo Forero Mobile Column, the closest the FARC has to a Special Forces unit, which has been responsible for bombs in Bogotá and has shown the ability to act well beyond its base in Caquetá.

Implementation of the agreement is still a way off, and the longer it takes the more likely the FARC is to break up. Previous peace processes in Colombia, that of the Popular Liberation Army (Ejército Popular de Liberación – EPL) in 1991 and the United Self-Defense Forces of Colombia (Autodefensas Unidas de Colombia – AUC) in 2006, saw around 20 per cent of fighters stay in the field. There is no reason that the FARC should not suffer the same; many factors like the earnings from drugs, mining and extortion, could mean that more fighters might now opt to stay outside of the new agreement.