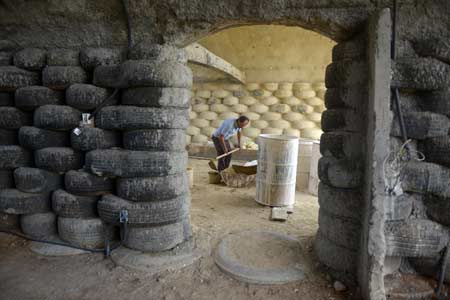 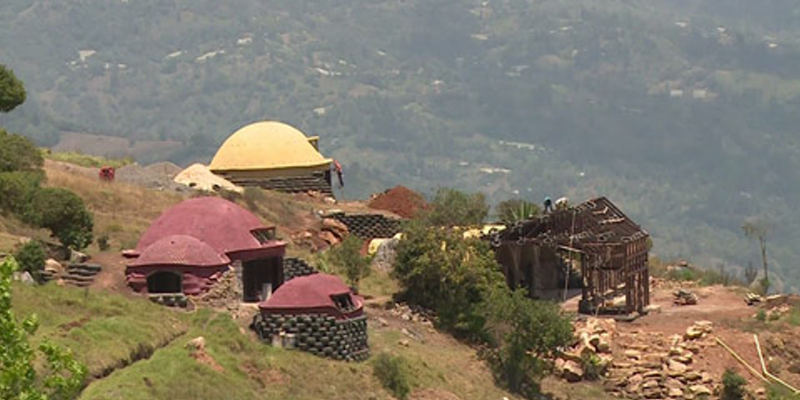 TODAY COLOMBIA – CHOACHM, Colombia — The highlands around the Colombian capital are scattered with small buildings that look like out-of-place igloos but are in fact innovative houses made from the tires that litter the country’s roads.

The woman behind the project is Alexandra Posada, a 35-year-old environmental activist who sports a cowboy hat and jeans while she works, her buff biceps rippling in her tank top as she slings around old tires and shovels them full of dirt.

“I get these tires for free because it’s a huge problem for people to get rid of them,” she told AFP.

“They take thousands of years to decompose — which we’ve transformed from a problem into an opportunity,” she said. “If you use them as construction materials, they become virtually eternal bricks.”

Posada is currently at work on several houses in the mountains of Choachi, a city of about 15,000 people an hour’s drive east of Bogota.

She and her team take trucks filled with old tires and fill them with earth, turning them into massive bricks that weigh 200 to 300 kilos (450 to 650 pounds) each.

Using a range of tires from semi trucks to cars, they stack them together around iron bars to create round structures that are at once solid and flexible — well insulated against the heat and cold, but also rubbery enough to withstand the earthquakes common in this seismically active Andes region.

Both are covered by another layer of tires, making “an almost non-degradable, impermeable” roof, said Posada.

The houses may be made from waste, but they have a captivating beauty.

The sweeping curves of the roofs are often painted in bright colors.

The walls are covered with tan mortar made of lime and sand, giving them a smooth adobe look interrupted by flashes of color from old glass bottles inserted in the masonry.

Posada also uses glass bottles to make skylights in the bedrooms, inserting them vertically in the concrete ceilings to create a pixilated stained-glass effect.

“These houses are made with reused materials, but they’re also beautiful, airy, with more indirect light,” she said.

It is an ingenious solution to a tricky problem.

Colombians throw out more than 5.3 million tires a year, according to official figures — nearly 100,000 tons of rubber that pollute the environment.

They often end up abandoned in unsightly piles along the country’s roads, or are burned to get rid of them, adding their acrid smell to the clouds of car exhaust that often choke Bogota, a sprawling city of more than seven million people.

Tire manufacturers and importers in Colombia are only required to recycle about 35 percent of the country’s total consumption.

And sanitation workers are not responsible for removing abandoned tires because they are considered “special waste.”

“The response we’ve been able to implement is pretty small in terms of the quantity of waste being generated,” said Gomez.

Posada has so far used about 9,000 old tires to make the walls, roofs, terraces and steps of her rubber “igloos.”

One of her workers, William Clavijo, a 57-year-old mason, said the job has taught him a lesson in “valuing things.”

“People usually just throw this stuff away. Now you see that it can be put to good use,” he said as he slapped layers of mortar across a wall of tires, hiding its past as rubbery waste abandoned on the streets of Bogota.