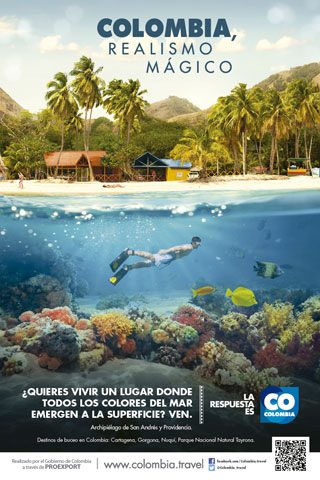 (TODAY COLOMBIA)  – Seasonal increases in the number of flights between North America and Colombia will allow more visitors than ever to experience that Colombia Is Magical Realism, Proexport Colombia announced.

Proexport, the government agency charged with promoting tourism, foreign investment and trade with Colombia, is eager to share its exciting calendar of events with international travelers and to welcome visitors to the country by air and sea.

As of December 15, JetBlue increased its New York-Cartagena weekly flight frequencies from three flights to five, allowing for a total of 750 more passengers to escape the winter weather during the 2013-2014 tourism season. In just five hours, U.S. and Canadian travelers leaving from and connecting through New York City can be on the sunny beaches of one of Colombia’s top coastal cities.

In addition to a number of other U.S. nonstop flights, American Airlines began direct Dallas-Bogota service in November. Canadians can reach Bogota via five weekly direct flights from Toronto on Air Canada, and via connecting flights on Avianca, Copa and others.

“According to Colombia’s Immigration Department, the year-end season is when the majority of Americans and Canadians travel to Colombia,” said the president of Proexport, Maria Claudia Lacouture. “We hope that demand for the increased frequency will remain high, leading to additional permanent flights to our vibrant country.”

Colombia expects 2014 to be a busy year for tourism.

In January, Cartagena will host the International Music Festival, welcoming classical artists and opera singers from all over the world. In February, more than 600 international buyers from the leisure, meetings and tourism industries will convene in Bogota for Colombia Travel Mart, the country’s most important tourism industry event. Later, in March, thousands of international visitors will travel to Baranquilla for the city’s famous Carnaval festival.

These events represent just a fraction of the exciting opportunities available for international travelers. Proexport Colombia launched its “Colombia Is Magical Realism” tourism campaign earlier this year to showcase all of its different, magical, unique and inspiring vacation destinations, from beaches to mountains, deserts, cities and jungles. With more than 800 direct flights from 20 different countries and 27 cruise lines stopping in three major ports of call, there are many ways for visitors to experience the country.

Colombia welcomed more than 864,000 foreign visitors in the first half of 2013, with the largest number visiting from the U.S. and the tenth largest visiting from Canada.

QCOSTARICA - With the intention of protecting minors, a...
Cine (Movies)