By Rico
6 December 2012
Paying the bills

If you haven’t paid the 2013 Marchamo waiting on legislator Luis Fishman and his appeal of unconstitutionality, forget it, it is time to pay up.  Sort of.

On Wednesday the Sala Constitucional (Constitutional Court) rejected the appeal filed by Fishman on Tuesday. 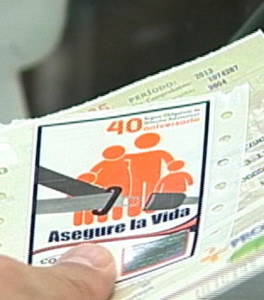 The unanimous Court decision dismissed the action challenging the rate for the 2013 Marchamo set by the Instituto Nacional de Seguros (INS)and approved by the Superintendencia General de Seguros (SUGESE).

Through an official communication by the Court’s press office, the justices considered the Fishman claim “had no standing and cannot be invoked to diffuse the different interests in the case”.

Due to the unease in the increase, tens of thousands of vehicle owners have not paid their Marchamo waiting on a decision, while motorcyclists have maintained a constant pressure on the government to reduce the amount to be paid.

But, hold on to your wallet just a little longer.

Late Wednesday, the Constitutional Court accepted a “recuros amparo” (appeal) by the Defensoría de los Habitantes (Ombudsman) to require the INS and the SUEGESE to hand over documents related to and explaining the reasons for he increase.

The INS had refused to hand over the sensitive data on the basis that it could not be guaranteed the information would not fall on the hands of the competition, placing it at a commercial disadvantage.

The Defensoría action was unrelated to the Fishman appeal.

As of Wednesday, the INS reports that only 151.739 had paid their Marchamo, some 33.000 less than the same period last year.

QCOSTARICA - In another episode of their recent friction,...
Fuel Prices