The number of people infected with covid-19 in Costa Rica reached 595 cases this Sunday, 18 new positives over the previous day.

The Ministry of Health also reported that the number of hospitalized are now 19, of which 14 are in intensive care units (ICU).

So far, 56 patients have recovered from respiratory disease. Seven more than those reported this Saturday.

The number of deceased remains at three, all men; two 87-year-old registered in the Alajuela hospital, and one more, 45-year-old who died last Wednesday, in the San Juan de Dios hospital.

The number of active cases (infected, less recovered and deceased) is 536. See the full break down of numbers here. 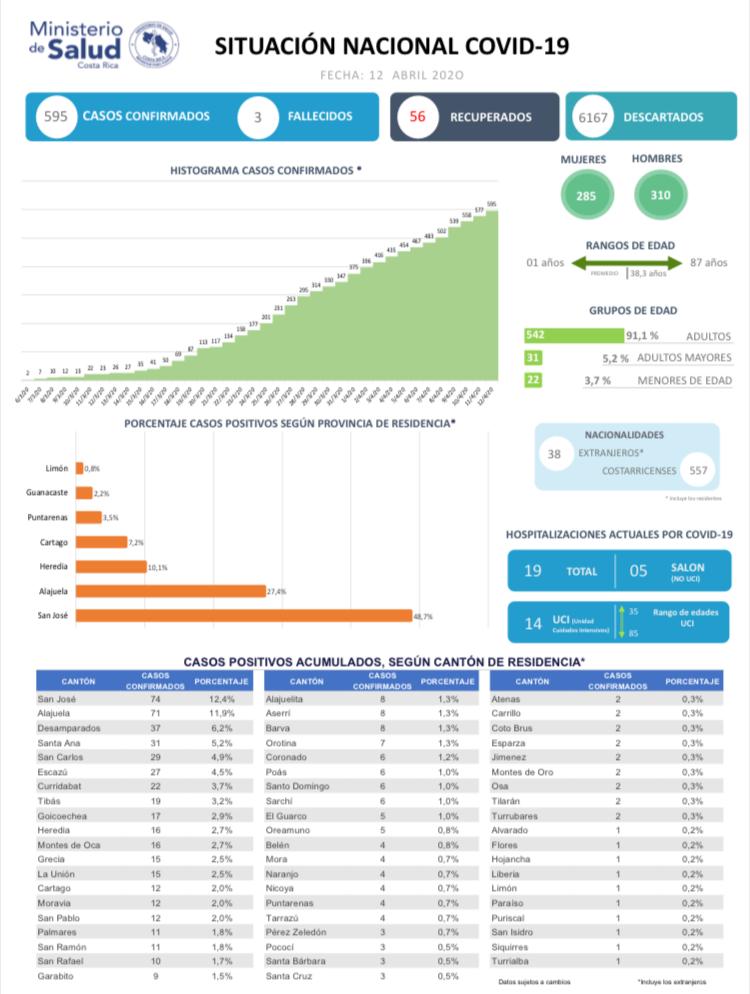 In the mid-day press briefing, Rodrigo Marín, director of Health Surveillance, of the Ministry of Health, reported 6,167 cases were ruled out since tests were carried out to detect the pathogen that causes covid-19.

Marín explained that the number of new daily cases is within the acceptable range, and therefore he asks the population to continue the hygiene measures to avoid many more spreading of the pathogen.

“At the international level there is talk of 20% of people to hospitalize, in Costa Rica wer are at 9%, and this speaks well of the Health system,” he said.

On Saturday, it was reported that a Nicaragua teen, whose identity is not being released publicly due to her being a minor, was detected to have entered the country illegally with a group of others.

She is pregnant and had a high fever, cough, nasal congestion and difficulty breathing. Several media outlets reported the teen to have been infected with the virus.

The president of the Caja Costarricense de Seguro Social (CCSS), Roman Macaya, confirmed that the teen was taken to the Upala hospital, under strict protocols and in coordination with the Red Cross.

Macaya reported that the teen tested negative for the covid-19 and is now in the care of the Patronato Nacional de la Infancia (PANI).

Asked whether she would be deported, Macaya explained that “She is a minor, and as a minor, she will be not returned to her country of origin. We have a Childhood and Adolescence Code that privileges minors in the country.”

The battle against the coronavirus

Director Marin used a sports metaphor, soccer to be precise, saying “We have not won absolutely anything yet. We are just beginning the second half of the game. The rival (virus) has brought the greatest powers in the world to their knees.”

Marin added that there has been no exponential growth in cases that jeopardize the national health system.

“It is true that the growth curve of cases has not become exponential, yet. We hope that does not happen because, again, there is no Health system in the world that can withstand an exponential growth curve,” said the director.

“We have been able to cope with the forecasts that have been made, but we are in almost 600 cases, that is why we must not let our guard down,” said Roman Macaya, concluding the press briefing.

QCOSTARICA - Ruling by 'decree' may not allow President...
Political Economy

QCOSTARICA (Elfinancierocr.com) Costa Rica has a total of 338...