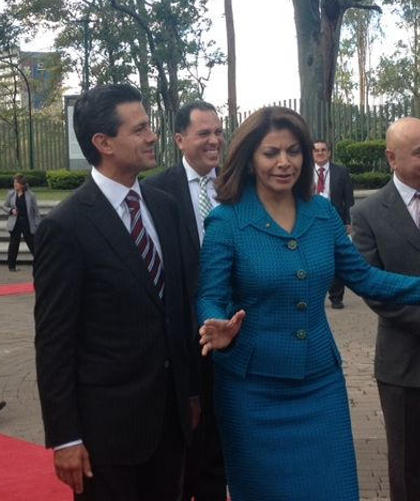 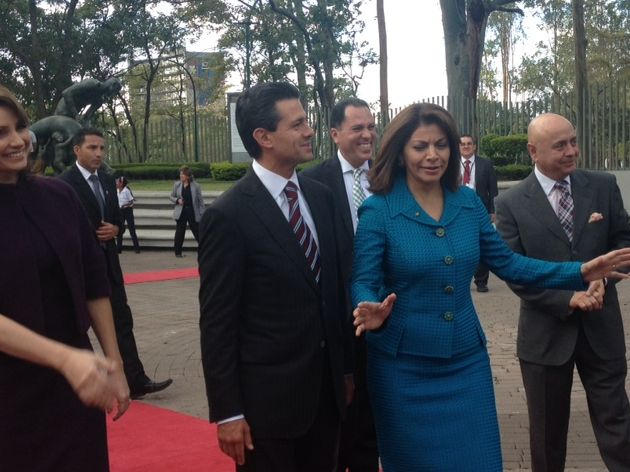 Mexico’s president, Enrique Peña Nieto, is in Costa Rica this week, arriving on Monday with his wife, Angélica Rivera, for the summit of the Sistema de Integración Centroamericana (SICA).

In a behind closed doors meeting on Monday,  Costa Rica’s presidenta Laura Chinchilla stuck her hand out asking her Mexican counterpart to finance the construction of the Sixola river bridge, at the Panama border.

Nieto, dressed in black suit walked down the red carpet along side Chinchilla, in her typical turquoise coloured dress, with a smile. After the meeting, still with a smile though his feelings on the inside might have been different, the two offered the press a message but did not allow questions.

Chinchilla explained that the talks focused on trade and investment, and that she asked her counterpart to finance the construction of the bridge over the Sixaola river, a bridge that connects Costa Rica and Panama on the Caribbean coast.

In fact, sources say that the meeting only dealt with financial issues.

For his part, Nieto did not comment on the handout, only asked that Costa Rica’s legislators support the approval of a free trade agreement between the two countries.

Neither leader provided any details or even if Mexico is willing to hand over cash to little Costa Rica for this project.

Although Costa Rica is in national mourning following the death of Supreme Court justice, Luis Paulino Mora, the customary minute of silence was not observed.