Union Calls For Demonstrations on Thursday 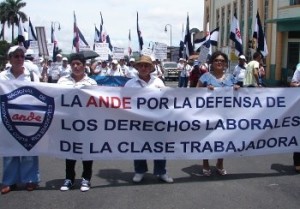 The Asociación Nacional de Educadores (ANDE) – national education association – union has called on its members and other public sector workers and unions, to assemble before the Ministerio de Trabajo (Ministry of Labour) building at 2:00pm Thursday, February 21.

In plain terms, the union wants to discuss the adjustment of bouses and incentives contained in the draft legislation.

“It is important the presence of workers in these processes. Unity makes us strong and allows us to continue to defend the rights we have gained over the years. The ANDE calls all to be present and speak out against any project or action that threatens the workers and thus against the welfare of their families”, said Gilberto Cascante, President of ANDE.