QCOSTARICA  via Costa-rica-guide.com – After nearly a decade of strict control the central bank allowed the exchange rate to bump up in early 2014 and it to around ¢555 – ¢565 to the dollar. 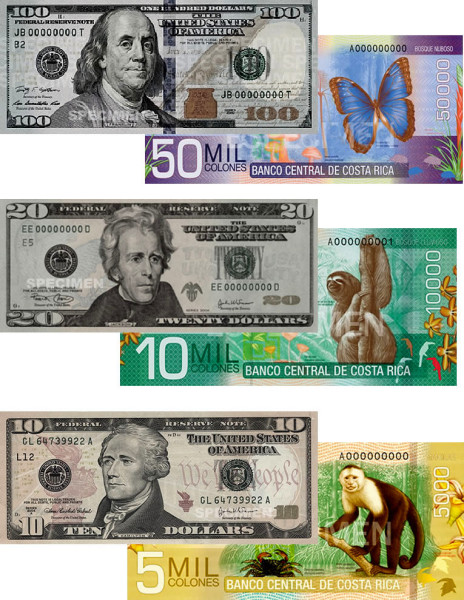 It’s been re-stabilized closer to ¢525 so the easy conversion described below is off by a bit but if you use it to estimate costs you’ll be pleasantly surprised to have money left over because everything is about 3-4% cheaper than the quick exchange shows (¢50,000 bill is really about $97 instead of $100).

Prices are often posted in dollars and colones making it unnecessary to do a conversion, but for the times when do need to convert it’s very easy. As long as you’re not worried about getting it exactly correct down to a fraction of a penny you can simply double the number shown on the Costa Rican currency and that’s its value in dollars.

Just do the same for prices, although there you won’t see such round numbers and instead of saying “mil” the price tags probably show the full number. It’s still easy though, just change the comma to a decimal point and double it.

QCOSTARICA - “I know that I am here for...
Cartago