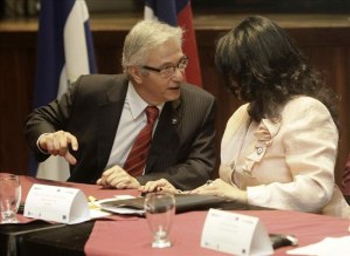 QCOSTARICA (Laht.com) Latin America needs to implement more educational and employment programs to achieve a more effective social reintegration of prisoners, as well as to convince the population of the need for this type of an initiative, experts said at a forum in Costa Rica.

The Secretary General of the Conference of Ministers of Justice of Ibero-American Countries (COMJIB), Fernando Ferraro, told Efe on Monday that the prison situation in Latin America was complex with overcrowding and inadequate infrastructure.

“Countries have entered into the revision of the concepts of prison activity giving primary importance to re-employment. In the past it was not understood that to create opportunities for those deprived of freedom is also an issue of security, and not just humanitarian,” he said.

There is a greater need for organized networks of education and the possibility of a job implying the involvement of the entire society which normally does not happen in most countries, but they are slowly building towards it, he said.

Ferraro participated at the opening of the conference called “Improving the Efficiency of the Prison Policies in Latin America: the Effective Inclusion of People in Conflict with the Law.”

The two-day event, which is organized by the European Union program for Social Cohesion in Latin America (EUROsociAL) is attended by representatives of the justice ministries of Peru, Uruguay, Ecuador, Argentina, Guatemala, Mexico, Panama, Dominican Republic, Chile, El Salvador, Bolivia and Costa Rica.

Costa Rican Justice Minister Cristina Ramirez said it was imperative for the region to assume a preventative and inclusive approach in justice policies and include educational programs for those in jail.

She cited electronic bracelets as an example to monitor offenders in Costa Rica.

Ramirez said that in Latin America the causes of criminality must be addressed in an integral way and the region should work to improve the labor market, promote prisoner education and educate the business sector so that it opens up opportunities for ex-convicts.

At the conference, the participating countries are to sign five documents related to rules for social and labor reintegration, specific standards for the rehabilitation of women, a protocol for cooperation with private companies, a protocol for coordination between institutions and a communication strategy.