The report does not explain the specific situation of Costa Rica, but takes the recent data from the Organization of American States (OAS), the United Nations Office on Drugs and Crime (UNODC) and the United Nations Development Programme (UNDP) and assures that in the country there are 397.6 thefts per 100.000 inhabitants.According to the report, the top 5 Latin American countries with the most thefts includes: 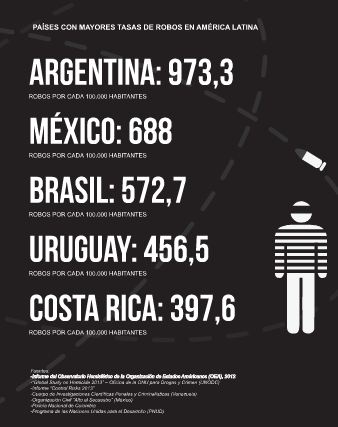 Costa Rica’s ministro de Seguridad Pública (Minister of Security), Celso Gamboa, explained that the numbers are a reflection of the criminal policies developed by the countries, “penalizing what was in the past were misdemeanors and now  felonies. So to that extent these are acts that are now criminal and are counted as statistics, which they were not before.”

Gamboa used the example of the  theft of a pen. Prior to 2007, in our country, it was classified as petty theft, ie. a bad act but not considered a crime.

“There are other countries in Latin America that do not consider these (petty thefts) as criminal acts but merely misdemeanors, that do not swell criminal lists,” said the minister.

When it comes to crimes such as homicides, the DEF report places Brazil and Mexico at the top of the list, with 50.108 and 26.037 homicides, respectively. However, when detemining the homicide rate, Honduras and Venezuela top the rankings with 90.4% and 53.7% respectively.